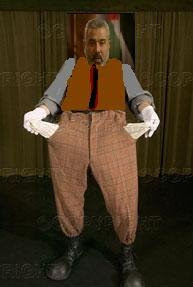 As India gets hit by Islam-O-terrorism, the mental midgets within the Finnish news media busy themselves with trying to limit the impact that “ISLAM” itself has on the radicalization of that faith’s adherents.

An article in the Helsingin Sanomat (subscription only) “Islamic extremist propaganda spreading on the net” provides some accurate information on the spread of Islamist propaganda on the Internet, then proceeds to disembowel the true reason of what actually drives the jihadis to violence.

Translation: Unemployment and discrimination drive people to deeds of desperation. The web pages also reach frustrated Muslim youths in Europe, who are trying to find their place within the West.”

Tundraman isn’t impressed with the new ‘Hämeen-Anttila’ (a theologist Ari Hukari) description of what ails the Muslim world.

Ari Hukari reproduce all false cliches about ‘unemployment and marginalization driving people to desperate acts’, to blur the hatred towards Jews by emphasizing the US as the primary enemy, and even fails to mention that ‘Israel conquering holy Muslim land’ means ALL of Israel.

Instead, it is claimed that ‘the conquering back of the Al-Aqsa mosque is the spearhead of the fight of Hamas’. Finally, Hukari makes sure to mention that ‘ordinary Muslims find the propaganda videos appalling and offending the Muslim faith but still attract many youth living in anxiety and agony’. It is an amazing act of turning the truth on its head.

That’s right Tundraman, it is indeed an amazing act of turning truth on its head, which is what the Helsingin Sanomat is “amazingly good at”. The way the HS spins it, Muslims are “driven to acts of violence” supposedly because they are poor and and treated unfairly, whether they be in India or in Gaza. But their logic doesn’t stretch to other non-Muslim groups who are as poor and disenfranchised as some Muslims may be, but yet still, are not prone to murdering others due to their poorer living circumstances. 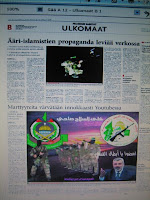 The western apologists for Islam-O-terrorism look between their fingers at the real reason why these people do what they do, because to consider the reality is just to painful to contemplate. They would rather invent reasons as to why a Muslim would strap a bomb to his/her chest and blow the infidel up, then to consider that just maybe, it’s because their religion has such a low tolerance for “the other”, that murdering the infidel is even given a holy nod of approval.

Then the Central Finland news paper, the Keskisuomalainen uses the same faulty logic in describing the violent acts of Muslims living in India. According to the KS’s fact sheet in the “tree version” of the paper, “experts say the Muslims bad living conditions have driven many into extremism”.What a crock of bull, the reason they are driven to acts of depravity is due to the brainwashing by these Islamist radicals, who accurately use their holy scripture to help motivate the followers of Islam into defeating the non-Muslim. That thought, more than anything else, terrifies the “experts”, politicians and academics, that’s why they propagate the myth of Muslim “disenfranchisement” being the catalyst for terrorist violence. The alternative is just too unthinkable. *L* KGSUPDATE: Killing someone for the sake of Islam is acceptable by 1/3 of Muslim students in Britain. Telegraph July 27 2008A third of Muslim students in Britain believe killing someone in the name of religion is justified, a new poll claims. The survey found that extreme Islamist ideology has a profound influence on a significant minority of Muslims on campuses across the country. The findings will concern police chiefs, the security services and ministers, who are struggling with radicalisation among Muslim communities.The YouGov poll was conducted for the Right-wing think tank, the Centre for Social Cohesion, at 12 universities, including Imperial College and Kings College London. It also found:
40 per cent support the introduction of sharia into British law for Muslims. A third back the notion of a worldwide Islamic caliphate (state) based on sharia law.(…)

It’s got to be that “poverty thing” that’s the root cause of their angst……right ? *L* KGS