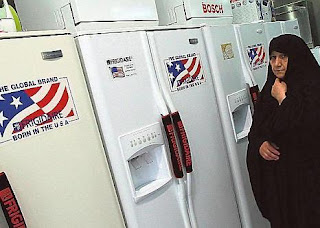 The recent US diplomatic flurry with Iran is worrisome, for it does indeed mark a departure from US president George Bush’s policy of no diplomatic exchanges with Iran, until it suspends its uranium enrichment programme.

The US intends to send US Under Secretary of State, William Burns to a high level meeting with Iranian officials to…talk, yet again, about its nuclear weapons program. All of this of course favors the Iranians, who have taken the North Korean model of “talk, agree and then do as it wishes”, while the West continues to wring its hands in frustration.

Another galling aspect to the badly flawed US policy vis-a-vis Iran, is the US’s continued flow of trade with mullah run regime, which doesn’t speak too highly of the US’s intention to isolate the Iranian regime “until it cries uncle”. Forget it, the US has been undermining its own foreign policy from the very beginning, by allowing US economic trade with Iran to go ahead unimpeded, all the while it’s supposedly serious about making Iran into a “pariah state”. Yeah right, with all those American appliances and who knows what else being sold there, the Iranians are really troubled about being turned into “pariahs”.

In a Helsingin Sanomat editorial in yesterday’s paper, the European response to the recent news -though containing a bit of sarcasm- couldn’t be more positive, in fact they’re thrilled! Finally after wasting so much time, the Americans are joining in on the talking, and since having gained so little from these talks themselves, now they have the Yanks to help share the blame.

The HS editorial (18.07.08) puts a lot of emphasis on the Iranian’s “quiet overtures” for ending the diplomatic stalemate with the US, as well as bringing to a close the concerns over its nuclear intentions. The editorial also mentions the dissatisfaction of both the Russians and Chinese over Iran’s explanations to its true intentions, deeming them to be “insufficient” (which is true), but the two powers have a long history of deep involvement with the mullah run regime, and of the two -the Chinese- has been more than willing to allow the N-Koreans to achieve nuclear weapons status while “feigning concern”.

While the HS editorial is correct in pointing out that the US deems the alternative of striking Iran as frightening and incalculable, the worst scenario of a radical regime that has promoted -repeatedly, and on all levels- the thought of mass genocide of Israelis (and subsequently Palestinians) was left unmentioned. War is always the least acceptable alternative, but allowing a genocide to happen because a weak kneed West hadn’t the stomach or spine to stand up to religious-homicidal utopians, is the worst scenario…by far.

The HS also puts way too much importance on the recent “supposedly” positive developments in the negotiations with the N.Koreans. As in times past, Pyongyang will more than likely, when the time is right, back track from its original signed promises, and continue its black mailing of the West to gain even more compromises in order to ensure its own political survival.

The use of negotiations is solely a tactic, not a major strategy component of foreign policy, and it’s becoming increasingly clear that the Bush administration is succumbing to the whims of those in the US State Department that think otherwise. Pamela at Atlas Shrugs alludes to something that she observed some time ago, that the recent decline of violence in Iraq, could also be due not just to the “US surge” of troops, but also to a deal between Iran and the US.

Pamela: “Some months ago I worried here that the quiet in Iraq might be at least in part the result of a deal made between America and Iran: in exchange for Tehran’s calling off the bombers in Iraq to help put another Republican into the White House, the Bush administration would undertake not to attack Iran. Yesterday’s Guardian story that America is to station diplomats in Iran for the first time since the Islamic Revolution of 1979 and intends to send a senior official, William Burns (pictured above), to discuss Iran’s nuclear program with Iranian officials can only deepen that fear.

Unless this is all an elaborate bluff, the suspicion must be that what the Bush administration is now focused upon is not safeguarding the survival of Israel and the freedom of the world but on winning the presidency for the Republicans. After all, Bush has now effectively stolen Obama’s line of talking to Iran without preconditions. McCain, of course, has put himself in the opposite camp to Obama over Iran. If he doesn’t condemn this Bush volte-face in the loudest possible terms, the suspicion can only deepen that this is the very dirtiest kind of deal.

Meanwhile Israel is being isolated by America, which is giving Iran a further gift of the thing it most craves – time to build its nuclear weapons capability. What should be happening now is that the Iranian regime should be under the maximum economic diplomatic and military pressure, treated as a pariah state and kept guessing about the possibility of a US attack, all in order to weaken and destabilise it. Instead this latest act of craven American appeasement will strengthen it because it displays in flashing neon lights the message that America hasn’t got a clue what to do about Iran and so could Tehran kindly help it out of this jam, please. Far from avoiding war, this only makes it more likely – and more likely also that when that terrible eventuality occurs, Iran will be on the front foot.

Pamela’s depiction of what might be afoot cannot be dismissed too lightly, it most certainly dovetails with Bush’s recent ramblings about not wanting to be remembered as a “war mongering” president. He has been making a lot of overtures lately, and I don’t mean just to the Iranians, but even to the “global warming” alarmist crowd, so the “legacy thing” trap that all second term presidents fall into, is most certainly at play here. Trying to shore up the Republicans’ chances at winning the White House this year, could be one of the most despicable moves made by a sitting US “lame-duck” president.

Many people have taken a number of half-baked potshots at president Bush over the years concerning his foreign policy decisions, but this is a serious, justifiable criticism that the Tundra Tabloids is leveling against him, because Bush is turning his back on a strong legacy of doing the right thing…solely because it was the right thing to do, not because is was the most expedient thing to do. Politically engaging the Iranian regime solely to shore up his own party and secure his own legacy…will in the end prove to be a miserable failure. *L* KGS