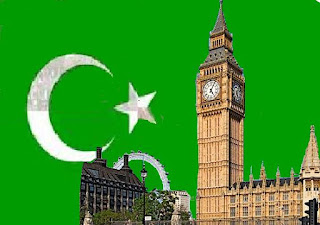 The top end of the slippery slope has been breached, perhaps setting in motion an irreversible trend in British jurisprudence. It spells disaster not only for Britain but for the rest of Europe as well.
LONDON (AFP) – The head of the judiciary in England and Wales said Thursday that Islamic sharia law could play a part in the legal system here.
Lord Chief Justice Lord Nicholas Phillips’s comments came after the head of the world’s Anglicans, Archbishop of Canterbury Rowan Williams, sparked outrage in February by saying Britain would likely adopt parts of the Islamic code.
“There is no reason why sharia principles, or any other religious code, should not be the basis for mediation or other forms of alternative dispute resolution,” Phillips said in a speech at the East London Muslim Centre.”
Listen up folks, when the top echelon of the judiciary start lauding the role of Islamic law within a western democratic state, warning bells and whistles should go off. We are entering a new stage of Islamization, and if the trend doesn’t reverse itself soon, the end result will be in the slow dhimmification of the once dominant non-Muslim populace, with more and more legislation being crafted to serve the ideology of the new tenants.
See how fast we have slid since the last couple of decades? If one were to have then promoted the same ideas being spoken in the halls of parliament throughout the EU now, they would have been laughed at as madmen, but now we see Archbishops and top judges of the land promoting extremely anti-democratic ideas…as normal. We are witness to the beginning of the downfall of Europe and western society, because it’s not just the ramblings of a few naive, foolish officials in question, but the reaction of the whole EU to the ramblings of these foolish individuals.
They should have been made the laughing stock of the whole EU, and whose resignation should have been demanded forthwith by not only from their peers, but by the outraged populace who would have refused to stand idly by while their hard won freedoms were being so easily tossed into the gutter. Times have changed, for the worse, with the warning bell clanging away but who is listening, does anyone really care? More here. *L* KGS