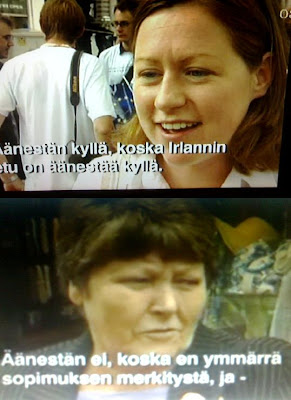 As the Irish people cast their vote today on the Lisbon Treaty EU Constitution -which will decide whether or not it will be adopted by all the 27 member states in the EU- Finland’s state TV news organization, YLE, is busy indoctrinating the Finnish viewer with the only “correct choice” the Irish voter should make. YES.
In the two minute ‘news’ segment, YLE’s Jarmo Mäkinen (whom the TT has personally met) lets the viewer know that Finnish democracy could be possibly subverted -as well as the rest of the EU states whose MP reps voted yes on the Lisbon Treaty- if the Irish vote NO.
The stage is set.
It shouldn’t come as a surprise then, that of the two people interviewed who come down on either side of the EU Lisbon Treaty issue, the first woman is the one who knows why she is voting yes on the Treaty, while the other woman who intends to vote NO, mutters that she is confused over the whole issue.
But it doesn’t end there, since her husband is voting NO, she will follow suit and vote no as well.
So there you have it folks, the media lays it all out for the viewer to pick the ‘natural choice’, pretty much in the same way a magician lures the volunteer to the choose the card to be picked, though the volunteer believes it was he or she that did the choosing.
The one who intends to vote NO is the confused, ignorant old housewife, while the one who votes YES is the one who knows all too well the reasons for doing so. Stupid housewife vs. smart young woman. Pretty neat trick huh? View video here, around the 45 second mark. *L* KGS