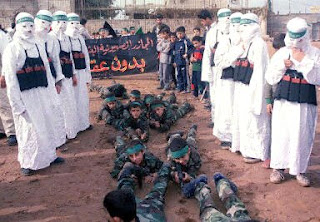 The TT is shocked, simply shocked that the Palestinians -who have been for years relentlessly indoctrinated through its government, media, mosques and schools with incitement and violence towards Israel and Jews- support the massacre of eight Israeli students. Logic dictates that there certainly must be some connection between the two, cause and effect, right? Duh.

Al Avai: A disturbing survey. Glossed over is the observation that even if Israel returned to pre-67 lines, 44% would _still_ oppose normalized relations!

RAMALLAH, West Bank — A new poll shows that an overwhelming majority of Palestinians support the attack this month on a Jewish seminary in Jerusalem that killed eight young men, most of them teenagers, an indication of the alarming level of Israeli-Palestinian tension in recent weeks. The survey also shows unprecedented support for the shooting of rockets on Israeli towns from the Gaza Strip and for the end of the peace negotiations between Palestinian and Israeli leaders.

The pollster, Khalil Shikaki, said he was shocked because the survey, taken last week, showed greater support for violence than any other he had conducted over the past 15 years in the Palestinian areas. Never before, he said, had a majority favored an end to negotiations or the shooting of rockets at Israel.
“There is real reason to be concerned,” Mr. Shikaki said in an interview at his West Bank office. His Palestinian Center for Policy and Survey Research, which conducts a survey every three months, is widely viewed as among the few independent and reliable gauges of Palestinian public opinion.
You better believe that it’s a cause for concern, it shows that the Palestinians are not anywhere near in wanting to end the conflict, which makes the current US policy of arming the enemy of its close ally Israel, highly problematic if not outright folly. So once again Israel is forced to sit tight while the US supplies the terrorist entity with more money and weapons that will of course be turned against Israel at some time in the future.
This whole endless cycle of stupidity revolves around the premise that, “Fattah represents the only side with which the Israelis and the West can do business with.” It’s an assumption that has been repeatedly proven to be false, and with both the people and their leaders being unpersuaded that violence and the dream of a “greater Palestine” is the wrong course to follow, the war will go on.
A new reality has risen to the forefront in the conflict between the two sides, and it must be addressed, not downplayed or cast aside in favor of “familiar policies” that resemble nothing more than wishful thinking, there’s been enough of that already. The NYT article goes to say that the pollster believes “Israel’s actions” are to blame for the shift in opinions, but once again, it’s a very dubious and all to familiar (easy) line of thinking to take.
What now lies at the heart of the conflict has always been there from the very beginning, the Arabs’ inability to accept the reality of a non-Islamic state in the heart of the Arab/Muslim world. Though Arafat and Fattah were understood to be secular, Islam has always played a role in their thinking, such a belief system can never be totally dismissed away in that region of the world, nor kept from influencing their perception of Jews and a Jewish state.
That is one of the major reasons why both Hamas followers, as well as supporters of Fattah, can be as equally violent towards the Jewish state of Israel. It’s all down to how Islam demands that no area that resides in the “house of Islam” can ever be allowed to be removed from it. A Jewish state does exactly that, and they will never allow for it, as long as Islam remains fundamentally unchanged. More here. *L* KGS