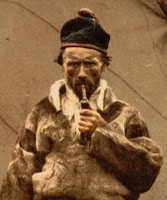 Tundra Tabloids contributer, Tundraman, expounds on the basic social psychology behind the demonizing stereotype of Israel in the Finnish media. The “consequences” are inserted by Tundraman, the rest is from the book by Augoustinos & Walker: Social Cognition.

Here is a small piece of basic social psychology, that makes it very clear what we are up against when trying to change the everyday construction and communication of the “devilish little Satan” in our media: The prevailing demonized stereotype of Israel and the Jews is deeply ingrained in our Finnish culture and society, to the extent that these stereotypes have become natural parts of our thinking.

STEREOTYPES are cognitive schemas, because they:

(a) direct attention
(b) guide encoding and retrieval of information, and
(c) save cognitive energy.

(Consequence 1: Just mentioning Israel activates the stereotype – and how frequently doesn’t that happen?)

(Consequence 2: Even if Israel would behave differently from what is expected, that information will be ignored/forgotten)

(c) The use of stereotypes frees up cognitive resources for other tasks.

(Consequence 3: It demands too much cognitive effort to rethink Israel – it is much more convenient to stick to the old stereotype)

(a), (b) and (c) do not depend on the conscious awareness of the stereotype label – they happen anyway.

(Consequence 4: Most people are unaware of a, b, and c above)

STEREOTYPES are also social schemas, or even social representations, because they

(a) are learned by individuals usually in their early years

(Consequence 6: when they have been around for millenia, they are more or less globally shared and deeply ingrained)

(c) are discursively constructed in the course of everyday communication, and,

(Consequence 7: they are re-constructed in mass media every day, all over the world)

(d) once objectified, assume an independent and sometimes prescriptive reality.

(Consequence 8: the primary example is the stereotype-driven reporting on the alleged death of the al-Dura boy, and what happened after that)

Stereotypes are functional for society or at least for some groups in society, as well as for cognitively slothful individuals.

STEREOTYPES are linked to PREJUDICIAL BEHAVIOR through expectancies. Stereotypes act as a kind of cognitive anchor for expectations about what another person or group of people is likely to do. Once activated, these behavioral expectancies act as self-fulfilling prophecies, confirming the initial stereotype; not only do people interpret behaviors of others in ways that support their schematic knowledge of the world, but they actually elicit the very behaviors they expect others to perform (= the self-fulfilling prophecy).

(Consequence 9: everything Israel does is interpreted through the prevailing stereotype about it. The self-fulfilling prophecy does not apply in this case, although it may for some single individuals).