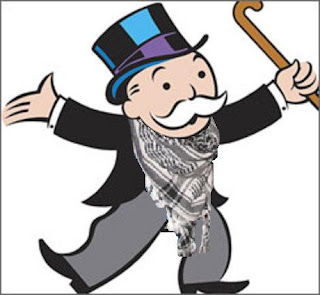 For those who haven’t heard yet, the giant toy and game company, Hasbro, decided to introduce a new version of its famous board game Monopoly World, where players travel around the world buying property, and in a fun way, try and enrich themselves at the expence of other players.

What ensued was a mass rush by people around the world to push their own capital to the top of the list of cities to be considered.

What was noticed after the international vote stuffing really got under way, was that Jerusalem, which was receiving a land slide of votes, was left as the only capital city on the list that was without a country. Though the company’s official line was:

“Parker Brothers, the makers of board game Monopoly has embarked upon an exercise to find the world’s most popular cities as voted for by the public.

It was never our intention to print any countries on the final boards and any online tags were merely used as a geographic reference to help with city selection.

This is clearly stated in the terms and conditions of our campaign. We would never want to enter into any political debate.”

Pamela at Atlas Shrugs asked, what debate? Jerusalem is in Israel, asshat. Touche!

So what happened next is that the decision makers at the company did the second best thing, they removed all the countries from their online voting list. It would have been better if they had just returned Jerusalem as Israel’s capital once again, but they couldn’t be seen doing that now could they? More here. *L* KGS

Thanks to the Baron for the second pic!