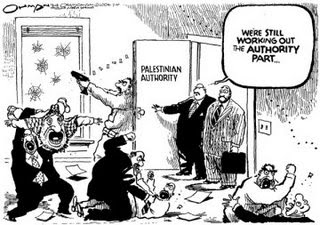 The Tundra Tabloids came across a gem of a statement from the EU envoy to Israel, Ramiro Cibrian, who (surprise) criticizes Israel for not having showed enough trust in the Palestinian Authority.

Apparently the EU still holds to the fiction that there is some kind of political cohesion remaining within the PA, and expect Israel to share their deluded notions and remove some of the security measures Israel deems necessary in safeguarding its citizens, in order to give the PA some needed credibility.

Just what measures the Palestinian Authority has implemented, to give Israel an increased sense of confidence in the PA’s ablilities to police itself, remained unmentioned. Perhaps because the Palestinians themselves know their ability to do anything –except in making more demands– are non-existent. But that little piece of inconvenient truth doesn’t get in the EU envoy’s way. Here’s a teaser:

Ramiro Cibrian: The EU envoy to Israel criticised it on Monday for still failing to ease conditions in the occupied West Bank, saying it should have more confidence in the Palestinian Authority.

Palestinian prime minister “Salam Fayyad is an extraordinary counterpart but there is no softening of measures implemented by the IDF (Israel Defence Forces) in the West Bank.

“We would like to see the Israeli authorities at least start to think on how to remove some restrictions in the West Bank and to establish some kind of links with the improved Palestinian Authority.”

Let us try and wrap our minds around that one shall we? Israel should have more confidence in the improved Palestinian Authority? Based on what? According to Barry Rubin from the Gloria Center, Global Research in International Affairs, “Fatah seems to be collapsing.” How could a collapsing Fatah inspire any measure of confidence in Israel towards the Palestinian Authority?

There are at least five factions operating in Fatah today, and even that is an understatement. While PA “president” Mahmoud Abbas and his prime minister, Salam Fayyad enjoy Western support, they have very little from their own organization. These two are relative moderates who have no internal base of support. Even the very tiny group of those who can be called moderate is split since, for example, Ahmad Khouri (Abu Ala), is quarreling with Abbas.

Then there are the cronies of the late head of Fatah and the PA, Yasir Arafat, who have not developed any moderate tendencies but are using Abbas to cling to power. A typical example of this group is Hakam Balawi who was the PLO ambassador to Tunisia when Arafat’s headquarters were there, a particular favorite of Arafat. These people are basically careerists who simply stick with whoever is leader.

A third group are the hardliners, like Abu Ali Shahin, who views himself as a revolutionary fighter. Other powerful figures in this group include Farouq Qaddumi, the actual head of Fatah; Sakhr Habash (Abu Nizar), chief of the Fatah Revolutionary Committee; and Salim al-Zaanoun, head of the Palestine National Council (PNC), the PLO’s legislature. These people want a continuation of armed struggle against Israel and believe that total victory is still possible.

A fourth faction can be called the “young guard,” but this is also split among different contenders for leadership. Muhammad Dahlan, formerly the leading Fatah security (i.e., military) commander in the Gaza Strip is one candidate; Marwan Barghouti, the head of Fatah in the West Bank and now imprisoned by Israel, is another. Dahlan and Barghouti are also very much at odds.

Recently, Shahin has called Abbas a failed leader who should resign. Balawi claimed Dahlan was plotting against Abbas, and Dahlan in return accused Balawi of being an Israel spy. As if this isn’t enough, the “young guard” knows that the current leaders will not give it any meaningful share of power in Fatah. The group, for instance, does not have a single member on the Fatah Central Committee.

In short, PA and Fatah politics are a mess. More here.

Now that is a more proper assessment of the situation that currently exists within the PA, then the one EU envoy, Ramiro Cibrian is trying to peddle to the Israelis. The Tundra Tabloids has always maintained that one of the first positive measures the Palestinians could employ that would get the attention of the Israelis, is the ending of the PA sanctioned incitement against Jews and Israel.

That more than anything else, would cause Israel to take a new look at the situation as a whole, and perhaps consider the EU envoy’s future statements more seriously. *L* KGS