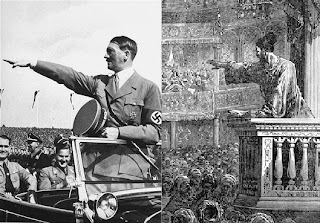 The scholar Bostom reviews an article by Cliff May in a National Review Online column, stating that:

“May’s inchoate effort, should be applauded for its attempted illustration of any possible ideological nexus between Hitler’s Nazism, and Islam. But ultimately, the associations he makes—the “ability to nurse grievances and stoke ambitions,” Germans/Aryans as a master race, and the concordant supremacism of “militant Islamism,” and generic “fanaticism”—ignore much more intimate, if uncomfortable to acknowledge, doctrinal and historical connections between ancient Islam, and modern Nazism, which I have elaborated, below.”

When it comes to fleshing out all the facts concerning ancient Islamic texts, and the personal views held by Islamic scholars and leaders throughout the centuries, no one puts things into a better proper perspective than Dr.Andrew Bostom. He writes:

During an interview conducted in the late 1930s (published in 1939), Karl Jung, the Swiss psychiatrist and founder of analytical psychiatry, was asked “…had he any views on what was likely to be the next step in religious development?” Jung replied, in reference to the Nazi fervor that had gripped Germany,

“We do not know whether Hitler is going to found a new Islam. He is already on the way; he is like Muhammad. The emotion in Germany is Islamic; warlike and Islamic. They are all drunk with wild god. That can be the historic future. “

Albert Speer, who was Hitler’s Minister of Armaments and War Production, wrote a contrite memoir of his World War II experiences while serving a 20-year prison sentence imposed by the Nuremberg tribunal. Speer’s narrative includes this discussion which captures Hitler’s racist views of Arabs on the one hand, and his effusive praise for Islam on the other:

“Hitler had been much impressed by a scrap of history he had learned from a delegation of distinguished Arabs. When the Mohammedans attempted to penetrate beyond France into Central Europe during the eighth century, his visitors had told him, they had been driven back at the Battle of Tours. Had the Arabs won this battle, the world would be Mohammedan today. For theirs was a religion that believed in spreading the faith by the sword and subjugating all nations to that faith. Such a creed was perfectly suited to the Germanic temperament. [emphasis added] Hitler said that the conquering Arabs, because of their racial inferiority, would in the long run have been unable to contend with the harsher climate and conditions of the country.

They could not have kept down the more vigorous natives, so that ultimately not Arabs but Islamized Germans could have stood at the head of this Mohammedan Empire. [emphasis added] Hitler usually concluded this historical speculation by remarking, “You see, it’s been our misfortune to have the wrong religion. Why didn’t we have the religion of the Japanese, who regard sacrifice for the Fatherland as the highest good? The Mohammedan religion too would have been much more compatible to us than Christianity. Why did it have to be Christianity with its meekness and flabbiness?”

“The difference between Germany’s attitude toward Jews and Arabs has been clearly shown in the exchange of letters between the former Prime Minister of Iraq, Rashid Ali, and the German Institute for Racial Problems. We have never said the Arabs were inferior as a race. On the contrary, we have always pointed out the glorious historic past of the Arab people.”

Although now, inexplicably, almost ignored in their entirety, writings produced for 100 years between the mid-19th through mid-20th centuries, by important scholars and intellectuals, in addition to Carl Jung—for example, the historians Jacob Burckhardt and Waldemar Gurian, philosopher Bertrand Russell, Protestant theologian Karl Barth, sociologist Jules Monnerot, and most notably, the renowned 20th century scholar of Islamic Law, G.H. Bousquet—referred to Islam as a despotic, or in 20th century parlance, totalitarian ideology.

Being imbued with fanaticism was the ultimate source of Muhammad’s great strength, and lead to his triumph as a despot, according to the 19th century Swiss historian Burckhardt:

“Muhammad is personally very fanatical; that is his basic strength. His fanaticism is that of a radical simplifier and to that extent is quite genuine. It is of the toughest variety, namely doctrinaire passion, and his victory is one of the greatest victories of fanaticism and triviality. All idolatry, everything mythical, everything free in religion, all the multifarious ramifications of the hitherto existing faith, transport him into a real rage, and he hits upon a moment when large strata of his nation were highly receptive to an extreme simplification of the religious.”