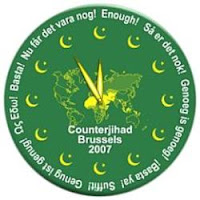 I am deeply honored that the esteemed Brussels Journal republished a comment of mine at the Gates of Vienna, under the tile “Does Europe’s Holocaust Guilt Benefit the Islamists?”

I am reminded of a conversation I had with a Finnish academic a few years ago, who drew a similar comparison between how Europe is currently behaving now, and how Jews in Europe behaved to the coming Nazi danger in the 30’s.

The academic stated that a people who are publicly targeted for violence have extreme difficulty in believing that the words of violence being directed against them, could possibly reflect the true intentions of those who are working towards their inevitable destruction.

But ironically, it is that same European guilt over the Jewish Holocaust, which is now being used by the Islamists, – regardless of whether they are of the violent version or not – for their own advantage and to the detriment of Europe. It is furthering the process of Europe’s eventual entrance into the “Dar al-Islam”, or the House of Islam. KGS