“A director who shares the ideas of Iran’s hardline president has produced what he says is the first film giving an Islamic view of Jesus Christ, in a bid to show the “common ground” between Muslims and Christians. Nader Talebzadeh sees his movie, “Jesus, the Spirit of God,” as an Islamic answer to Western productions like Mel Gibson’s 2004 blockbuster “The Passion of the Christ,” which he praised as admirable but quite simply “wrong”.

The Iranian movie of Christianity’s founder will most likely find a sympathetic voice in Finland, Islam apologist, Jaakko Hämeen-Anttila, professor of Islamic literature has been pushing the “bridges between the two faiths of Islam and Christianity” for some time now. No matter that the Islamic POV of Jesus is a total heresy to Christian belief, Islam and its apologists will try to push their views in order to dilute Christianity which will in the long run, favor Islam.

Since the Iranian’s have come out swinging, I think it’s high time for a movie about Islam’s main guy, Mohamed, who is deemed by many Christians as a pedophile for his marriage to a nine year old girl Aisha. A murdering thief for his ordering of assassinations and pillaging of Jews and other non-Muslim tribes in the Arabian peninsula, as well as cult figure who has inspired murder and mayhem throughout the centuries.

I most certainly would pay for a ticket to see an accurate depiction of Mohamed on the silver screen. The screen writers don’t even need to look for other source material for the movie script, there are reams of material to be found in the Mohammedans own holy books. Now that would be fair play in every sense of the word. More here. *L* KGS

Update: The Sheik focuses on the same angle: 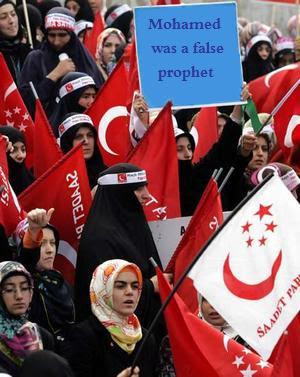 Christians ought to revolt and demand a documentary on the alternative view to the hagiographical Islamic account of the life of Mohammed.

One that might examine (impartially and objectively, of course) the historical assertions that he was a :