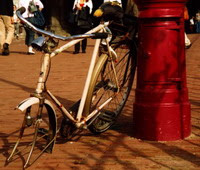 Shocker from the Bad News From The Netherlands blog, that reports: “the number of attacks on Amsterdam places of business increased from 296 incidents in 2006 to 394 in 2007. The head of the Amsterdam police Bernard Welten called this a shocking development.”

collaborating with local imams in preparation for the screening of the movie on the Quran being produced by conservative politician Geert Wilders. The police are afraid that there will be riots when the film is shown.”

What they’re afraid of is that members of the faith that claims to be a “religion of peace” will be soon rioting in the streets, terrorizing both businesses and townsfolk. Nothing better strips the veneer of peace from an ideology, then to see its adherents rioting in the streets calling for blood.

Note: The Bad News From The Netherlands blog, is a “project sets out to demonstrate that media coverage can degrade a country’s image by using selective news without context. It uses the Netherlands as an example. It is a reaction to the frequent misrepresentations of Israel in many ways in major media, including those of the Netherlands.”

There is a growing list of other countries included in the project as well, including Finland!