I am reminded today of the recent brouhaha that has been brewing for the past six weeks, between the LGF blog and the Gates of Vienna and CVF, over the participation of the Vlaams Belang at the Counter Jihad Conference in Brussels.

As I have stated before, I was one of the speakers there, and I was very much impressed by ALL who particpated at the two day conference. One is rarely (if ever) given a chance to participate is something so grand and so monumental, that to be a part of it, is to be a part of history. It was something I’ll never forget.

The reason I bring this up again, is due to the fact that because of the LGF’s continued sniping at both the GOV and the CVF, the Baron has recently took to highlighting the sillyness of the charges being leveled at the Vlaams Belang. So the head of the VB, Filip Dewinter has a Celtic or Odin cross on his bookshelf. If one is ignorant of the local culture involved, they could be lead to believe all kinds of unfactual things about someone or an entire culture for that matter.

I came across an article yesterday in a Finnish news magazine, about a Finnish movie being readied for viewing in the not too distant future. It’s about the fighting that took place at Tali-Ihantala, in Finnish Karjala (Karelia) during the last stages of the Continued War between the Finns and the Soviets during WWII.

One of the pictures in the article brought to mind something that the Baron was highlighting, that wrong assumptions can be made if one is ignorant of the facts. 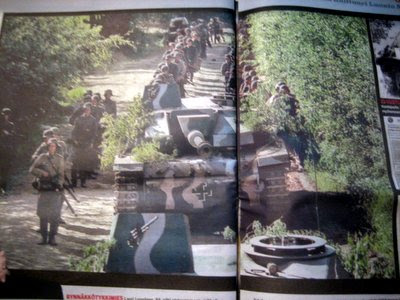 The picture on the left is from a scene in the Finnish film of the battle at Tali-Ihantala in the former Finnish area of Karelia. Taking a closer look at the Finnish tank one notices a swastika.

But hold on a second, the use of the symbol in the Finnish military predates the German use of it. It has absolutely nothing to do with German Nazism, but there you have it for the eye to see.

“It is important to understand that the swastika emblem of the early Finnish Air Force has nothing to do with the Nazi Germany. The swastika was the symbol of good fortune used by the Swedish Count Eric von Rosen who during the Finnish Civil War presented to the Finnish White Army its first aircraft on March 6th, 1918.”

White army? If one were to make wide sweeping assumptions, the Finns were indeed white supremacists during WW1. But the label of “white” denotes the anti-Red faction during Finland’s civil war against the Communists. One could also “assume” that during WWII, the Finnish government and its military and the people supporting it, as well as Jews that served in the Finnish military, were all Nazis.

That assumption would be prove to be 100 % false. It pays to know the facts before one jumps to some very unfortunate conclusions. That is just what the LGF crowd are doing presently with their raking over over the coals of the Vlaams Belang.

I wonder –without doing any kind of honest research- what kind of conclusion would one draw from this Finnish medal that denotes the wearer as a pilot in the Finnish Air Force during WWII? 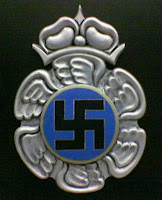 I believe that there are going to be a lot of people with egg on their faces if they keep up with this kind of nonsense.

Let’s all hope that Charles Johnson and the rest of his lizards start seriously looking into what the people of the Vlaams Belang are really saying, and what state they are supporting at the expence of gaining many valuable votes.

They support Israel out of a sense of what is right, unlike the socialists who hate the Jewish state due to their warped ideology as well as wanting to pander to the Muslim vote.

I’ll take the VB any day over the Socialists, of the which the latter represents an ideology from which has sprung the two worst tyrannies ever devised by man, the Communists and National Socialism. *L* KGS

Note: The Tundra Tabloids will be posting later in the evening tomorrow.