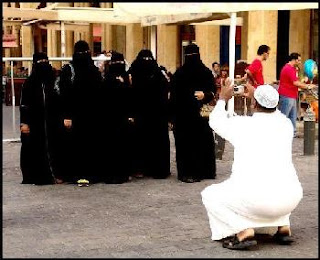 Magdi Allam: “Mr Capocelli’s counter-initiative as symptomatic of an attitude that was “leading us straight to the suicide of our civilisation”.

The prefect of Treviso Italy, Vittorio Capocelli, recently ruled in favor of the right for Muslim women to wear the burka in public, after reviewing a complaint lodged by immigrant Muslims.
It reversed a law enacted in 1975 that bans the wearing of a face mask in public in the city Treviso.
Now picture if you will, the ability of law enforcement officials to pick out a suspect in the crowd of these tent wearers.
But the people of Treviso won’t have to worry about thugs, criminals or terrorists getting away from the authorities by wearing the oversized garments. The prefect has already thought about that scenario, by stating in his ruling that:
“they would have to reveal their features if asked to do so for the purposes of identification.”
Rrrright, like the local police would be brave enough to risk lawsuits from Muslim groups who are upset by law enforcement officials who dared to “ask for a peek”. They will most likely demand that female officers should do the peeking, and if one isn’t available at the moment, then “the veiled” should be allowed to pass unhindered. What a nightmare scenario.
Magdi finishes up by stating:
“Were it endorsed at national level, he argued, Islamic women “could soon be going to school, taking jobs and going around freely, completely veiled”.
Dr.Daniel Pipes offers some other examples of European stupidity and valid reasons why the Burka and Niqab should be banned from public. More here. *L* KGS
Via Islam in Europe.