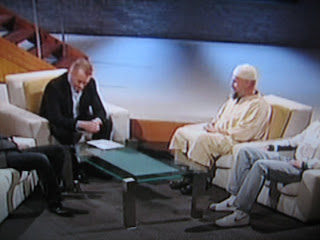 I thought that corporal punishment was forbidden in Europe! So in honor of Arto Nyberg, host of the show that bears his name, the Tundra Tabloids dusts off it’s flying pig..
“Squeaky“.

Nyberg’s program yesterday, featured two well known musicians (in Finland) and also the spokesman for the Finnish Islamic Party, Abdullah Tammi. The FIP spokesman –and former Social Democrat and fireman’s union representative–volunteered himself to be a guest on the Nyberg show, and was noticeably surprised when he was asked a series of hard hitting questions about his party’s intentions.

It wasn’t by accident that the music hating Islamist was asked to be a guest on the show, which focused (in part) on the guests’ discontent, for one reason or another) with certain problems they faced in the music world. Abdullah Tammi’s loathing for music in general was just icing on the cake. Over all, it was a job well done by Nyberg.

I won’t bother with the whole translation this time around, since it would be somewhat repetitious.

Nyberg: What have been the reactions since you made your party’s intention known?

Tammi: Very sympathetic, there has been some very positive feedback.

Nyberg: What about the negative?

Tammi: Well, there has been the some of that also.

Nyberg: What about sharia? You were quoted in the press as saying it was great! How can you be for something that allows a women to be stoned to death for adultry?

Tammi: Well, when you speak of sharia, you have to remember that those kind of punishments only account for 5-6 percent of sharia, which for the most part, deals in everyday matters of everyday life etc.

[The islamist was clearly shocked by the question, and he didn’t condemn sharia sanctioned brutality either ]

Nyberg: I hear that it even dictates what a woman should do during her menstrual cycle?

Tammi: It forms how a society should run according to God’s prophet Mohamed.

Nyberg: In other words it’s anti-democratic isn’t it?

Tammi: No it’s not, it gives people guidance (brings up the issue of alcohol)

Nyberg: Well people are able to decide for themselves the matters you speak of…

Tammi: But we listen to what God speak through Mohamed…(says something else I didn’t catch)

[Again no PBUH….tsk tsk, the novice]

Nyberg: What do you think of the death threat issued by al-Qaida in Iraq against Lars Vilks, in which 100 000 dollars was offered for his murder?

Tammi: Well, I was of course saddened by all of the developments, it looks like nothing was learned from the Danish cartoon scandal. Those who draw these things speak of freedom of speech but no one has the right to hurt other peoples feelings etc. etc…

Nyberg: But what do you think of these things?

Tammi: Well I believe that there needs to be more dialogue between the parties and…

Nyberg; Well you tell me, do you condemn the death threat or not?

Tammi: Well yes I condemn it.

Nyberg: OK fine, lets move on…. Finland has been evaluated as having about 30 000 Muslims. Sweden, which 500 000 Muslims hasn’t seen the need for an Islamic party, why does Finland need one?

[Tammi had claimed earlier that there were 55 000 Muslims in Finland, most likely the number was pulled straight from his fuzzy fez]

Tammi uses the same boiler plate response about there being a “need” in Finland for such a thing etc. etc..

Then Nyberg –in response to his whining about music in schools– offers a strong “in your face” rhetorical question: “So in other words all music out of Finland?”

The rest of the exchanges pretty much continued in the same way. Arto Nyberg then closes his show with the following line (paraphrased):

In deference to our guest who holds certain views about music –this show always closes with the familiar theme song– we will play something that Finns will hear five times a day if Finland ever becomes Islamic. He puts on the soundtrack to the Muslim call to prayer.

Nyberg’s point came across loud and clear! Kudos both to him and the producers. Abdullah’s performance was so pathetic you could almost feel sorry for the islamist……..not. *L* KGS