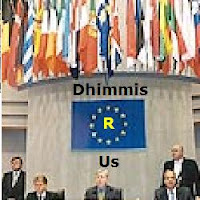 You can call this shameful conference, Durban II. The Euro-“dhimmi”-pean Parliament allowed its facilities to be used by NGO groups attending the UN’s “Committee on the Exercise of the Inalienable Rights of the Palestinian People”. A more fitting name for them would be the “UN Committee Bent on the Delegitimization and Destruction of the Israeli People”.

The same NGO’s and individuals represented at the last well known hate fest in Durban, were in full force in Brussels as well. British MP, Clare Short, unabashedly lied through her teeth when she declared in her speech that “Israel was not interested in a two-state solution”, and then went on to disparage the EU for “allowing Israel to build an apartheid wall”. The only EU parliamentarians that I know of that have showed any sense of morality by boycotting the boycotters, were the Polish MEPs.

“I will not take part in this conference. I saw the materials prepared by the organizers,” Bronisław Geremek, a Polish MEP, was quoted by Polish website, Europa21 as saying.”

“Although there is no official statement that Israel must be pushed down to the sea there, the choice of subjects and the attitude towards the problems shows that it will be a biased, conflict generating conference. Actually we can call it anti-Israeli,” he said.

‘Israelis can count on Poles’ “There is not the first such initiative. (The) Pro-Palestinian lobby is very active here. If in fact, the conference will become propagandist, Israelis can count on Poles,” Boguslaw Sonik, another Polish MEP, said. Konrad Szymanski, a third MEP, said: “Israel’s objections are fully justified. (The) UN Committee on the Exercise of the Inalienable Rights of the Palestinian People is a platform for activity of various extremists. According to the most of them Israel should disappear.”

“I am astonished that European Parliament allowed such activity to be placed in its building. If there is any activity against the conference, i.e. a petition signed by MEPs, I will be very glad to support it,” Szymanski added.

Actually I’m not surprised at all, the EU has repeatedly prostrated itself before the Arab block, this is just one more example of the dhimmification of European politicians. I’ll be checking up on the Finnish representatives in the EU parliament to see what they have done. More here. *L* KGS

Update: After talking with the assistants of two Finnish MEPs, Satu Hassi (Greens) and Eija-Riitta Korhola (Christian Dems), I am left with the notion that only the most diehard of anti-Israel bashing MEP’s are participating in the conference. According to the assistant of MEP Korhola, he wasn’t aware of any Finnish MEP’s who were planning on being present, and mentioned receiving an email from Swedish MEP, Gunnar Hökmark, who warned his fellow MEPs about what kind of anti-Israel event was going to take place.

I believe that the EU parliament was not the proper place for such a venue, but at least “hats off“to all the MEP’s who didn’t show up, including the Finns and Poles.

Tundraman observes: Good for the Finns and the Poles. However, politically, Finns and Poles (or even Swedes, although they may think otherwise…) do not matter much. What matters is that:

(a) EU actually permitted this disgrace to take place in its premises, and

(b) somebody must be attending it, and if there are several MP’s from big EU countries, like Britain, France and Germany, it is really really bad, and the EU should be reprimanded severley for it, on the highest official level, from each member state who has the guts to do something about it.

The member states are responsible for what their MP’s are doing there, so it does matter what they have to say about it. What sould be asked, therefore, is if the MP’s organizing this event reflect the official opinions of their states.