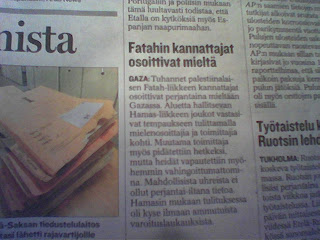 Take a look at the headline they gave to the small, side column article: “Fattah supporters demonstrate” (25.08.07). It is only after the fourth line into the mini article does one find out that Hamas fired upon demonstrators and journalists covering the march.

Now imagine if it were the Israelis involved in the shooting of demonstrators (Arabs or otherwise), you can be assured that the headline to the “main page article” would read “Israeli troops fire upon peaceful demonstrators“.

Without a doubt, the majority of Finnish journalists would of course dismiss out-of-hand, the notion that any bias exists within the reporting of the news media, but then, the black and white print does speak for itself. The KS couldn’t even muster up the temerity to name Hamas in the headline to a story, in which the Hamas were the principle characters, when most certainly Israel would have received TOP BILLING!

This is only one example of the Finnish news medias’ use of the double standard in its reporting on Palestinians and Israelis. *L* KGS