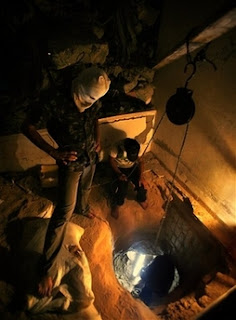 Though the digging of tunnels between Egypt and Gaza –in the border town of Rafah– has gone on for years, the al-AP has found a way to spin that fact to make it look like it’s a recent phenomenon.

AP: “Palestinian tunnel diggers, wearing masks to conceal their identities, use a pulley to remove sand from a smuggling tunnel in Rafah, in the southern Gaza Strip, on the border with Egypt, in this photo taken late Wednesday, Aug. 8, 2007. In underground darkness with stifling heat and limited air supply, Gazans are finding an antidote to their growing isolation: digging tunnels under their border with Egypt to smuggle everything from weapons to cigarettes to people. (AP Photo/Kevin Frayer) “

They’re not digging tunnels due to any “growing isolation”, they’re digging tunnels because smuggling contraband has always brought a very high price, –and they’re damn good at it– and that the Egyptians continue to look the other way while they busily make the sands of the border look like a hunk of Switzerland’s best Swiss cheese.

Not only do they dig tunnels from Gaza into Egypt, they also make them under the Israeli border. OH WHATEVER FOR? I do look with anticipation however, to see whether or not the moat will ever be built. With or without alligators, or better yet, Egyptian crocs ? *L* KGS