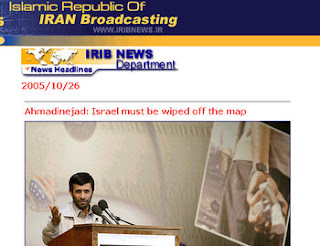 “To wipe Israel off the map“. To all those “die hard” apologists for Iran’s loony leader, including University of Michigan professor, Juan Cole, please read the caption to a picture taken from Iran’s own news service IRIB.

I am reminded of an exchange of words last year with Jussi Sinnemaa –a Finnish foreign policy analyst– for an article he wrote that appeared in a Finnish website for SUOMEN RAUHANPUOLUSTAJAT (Finnish Defenders of Peace), in which he tried to down play the serious of the Iranian leader’s words, “to wipe Israel off the map”.

KGS: “One wonders how he can twist words so, that no longer mean what the Iranian leader said. Its a mater of public record that Ahmadinejad was quoting the late Ayatollah Komanei’s words of the need to get rid of Israel.”

Sinnemaa: In my article I point out that Ahmadinejad was indeed quoting Khomeini, but You and I disagree on the exact translation. I am supported by several eminent Persian scholars (and I mean scholars of the Persian language, rather than Iranian scholars) including professor Juan Cole – who can hardly be described as anti-Israeli – in saying that “wiping Israel off the map” is certainly a mistranslation; the call is for “the Zionist regime (or more appropriate the regime occupying al-Qods) to be removed from the pages of time”.

While You will certainly interpret this differently, many people regard this statement as a wish for the regime to disappear, rather than Iran actively destroying the regime (which it cannot realistically do anyway). I have yet to see an Iranian leader saying outright that Iran will do the destroying.

Jussi Sinnemaa is on record stating that he denies that he is down playing Ahmadinejad’s highly genocidal statements, when actually he is. Though –most likely– he does not support Ahmadinejad’s views, (if he even actually understands them) he helps this dangerous man by disseminating false information, creating an ulterior scenario to the situation that actually exists.

Only the fringe on the far Left, (hopefully it’s still just the fringe) cling to that fanciful notion that Ahmadinejad meant only “regime change”. After having read many of Jussi Sinnemaa’s highly charged anti-American and anti-Israel screeds, I can safely include him as being a “far Lefty” as well. In other words, beyond any point of hope or reasoning *L* KGS