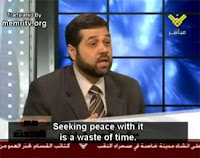 For all those fence sitters out there who still cling to the illusion that an unchanged Hamas can be pragmatic, Osama Hamdan shatters that nonsensical view in his interview on the Hezbollah Al-Manar TV network. MEMRI:

“The following are excerpts from an interview with Hamas representative in Lebanon Osama Hamdan, which aired on Al-Manar TV on April 2, 2007. “

Osama Hamdan: We in the Hamas movement will not accept any solution that would deny us our rights or detract from our principles. In other words, I will not accept a agreement saying that at the end of the day, Haifa, Jaffa, and Acre are Israeli cities, and part of the Israeli land. It should, at the very least, say that these cities cannot be liberated or regained today, but I will not accept any solution that prevents any future Palestinian generation from acting to liberate and regain the rest of the Palestinian land, if the current generation is incapable of accomplishing this…

…This [Zionist] entity is incapable of making peace. This entity is based on plundering and aggression. Seeking peace with it is a waste of time. What should be sought is a true solution, which will restore all the Palestinian rights, and will lead to an end to the existence of this entity in the region.

So in this Islamist supremist’s point of view, the Hamas terrorist organization can only make peace with an Israel that no longer wishes to remain a Jewish state. The Hamas will continue to indoctrinate its present day youth and future generations for the total destruction of Israel, (think Mickey Moussa right now) a Palestinian state living side by side the Jewish Israeli one,….at peace, is not an option. Who are we kidding (if not just ourselves) when we think that Hamas or any other Palestinian terrorist organization are interested in just the West Bank and Gaza?

I am reminded of a recent article (in Finnish) at the Suomen Rauhan puolustajat website [Finnish Defenders of Peace] by Karim Maiche, who writes about General Gustav Hägglund, former commander of the Finnish Defense Force (1994-2001), concerning his understanding of the Arab/Israeli conflict. The article is about a lecture Maiche attended at the Jyväskylä university last Dec. in 2006, titled “Israel and the Arabs, an impossible equation?”. Maiche writes of Hägglund saying:

“The 60 year old conflict in the Middle East is first and foremost about the Israeli state, not a religious war between Jews and Muslims.” “It’s not a question of Arabs hating Jews but of Zionists. Judaism and Islam are more tolerant than Christianity towards other religions.”

This sounds a lot like the nonsense that rumbles out of the mouth of people like Finnish Islamic poetry professor, Jaakko Hämeen-Anttila, and other Muslim apologists, who either grossly ignorant of Islamic imperialism throughout history, or for ideological reasons want to gloss over the “troubling parts” of Islam in order to give a colored version that fits their agenda. Maiche goes further on to say that the former Finnish commander:

“Doesn’t sign on to conspiracy theories, according to which Hezbollah is not a Iranian stooge nor a tool of Syria, He deems Iran as a logical partner for Hezbollah since other alternatives are few.”

Really? Hezbollah has already admitted that Iran approves all of their operations of terror. It’s a well known fact that the Hezbollah takes its marching orders from Tehran who not only funds but supplies it with over ten thousand missiles. Just what do these Finnish generals and academics use for source material in conjunction with happenings on the Middle East, the discredited university professor Juan Cole’s writings on the Middle East for boobs?

Professor Efraim Karsh, Head of Mediterranean Studies Programme King’s College, University of London, wrote an interesting article in the Sun, that gives a perfect example of the boobery that attempts to pass itself off as “serious scholarship”. Karsh writes in “The Palestinian Two-Step” a critique of Sari Nusseibeh‘s book “”Once Upon a Country: A Palestinian Life”.

Its well worth the read, not only for Karsh’s pointing out the legion of mistakes and outright falsifications contained in the book, but that he underlines the very point made at the beginning of this post, that like the Hamas, the so called “moderate” Sari Nusseibah also believes in the destruction of the Jewish state of Israel. How’s that for the so called “Palestinian pragmatism”? *L* KGS