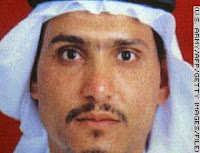 Al-Qaida’s leader in Iraq, Abu Ayyub Al-Masri, aka Sheik Abu Hamza Al-Muhajer, was wounded yesterday in a clash with Iraqi forces, with one aid being killed as well.

“The clash occurred near Balad, a major U.S. base about 50 miles north of the capital, Brig. Gen Abdul-Karim Khalaf said.” More here.
This is a result of good working intelligence, not “happen chance.” The operations currently underway in and around Baghdad have been widely known in advance, that already saw one major player, Muqtada al-Sadr taking refuge in Tehran. That a top al-Qaida operative has been hit (no info on his current status) early on during OPERATION LAW AND ORDER, means that some tangible gains have been made.
That it was Iraqi (US trained) forces involved in the spearheading of the ops, means that the US is successfully making the Iraqis an effective fighting force, capable of coordinating missions and carrying them out.
Whatever successes result from the operations currently underway, the most noticable will be the growing maturity and confidence of Iraqi forces in dealing with the insurgency. Let’s hope that more terrorists will be confirmed either killed or captured. *L* KGS
Update: Bill Roggio at The Fourth Rail has it that, both US military and Iraqi officials are backing away from the original claim of al-Masri being wounded.