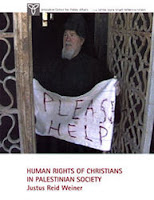 The violence and systematic persecution directed against the Palestinian’s Christian community at the hands of its Muslim majority, is a well known issue to those that frequent the pages of this blog. I have posted on many occasions proof that the Christian Arabs are being systematically driven out of their ancient cities by an ever increasing hostile Muslim populace.
This depressing trend in the Palestinian Authority is matched elsewhere in the Middle East, that has seen a steady mass exodus of its indigenous Christian communities, due to the rise of Muslim fanaticism that has resulted in a renewed interest in exerting its hegemony.

One would think however, that Christendom would be greatly alarmed by the growing trend which has taken place in broad daylight for all to see, especially if one travels for example to Bethlehem, or the other ancient town of Nazareth. The former rests within the Palestinian administered territories, with the latter being in northern Israel. In both cases, Muslim encroachment has resulted in a drastic demographic shift in the population, where Christians who once enjoyed majority status, have been reduced to being a dismal minority. A visiting Christian pilgrim would have a better chance of bumping into an Arab Christian in the metro area of Detroit, than in the heart of these two cities.

What is equally disturbing is the lack of outrage from the World Council of Churches (WCC) or other international Christian Church organizations. Why the deafening silence? I had recently exchanged emails with the Archbishop of Finland, Jukka Paarma, that left me unconvinced of the Finnish Church’s seriousness over the matter. Whether it’s out of denial or ignorance, or just bad/disingenuous information coming from sources in which they place their trust, the lack of knowledge in Finland over their fellow Christians’ suffering at the hands of Muslim thuggery is a crime in of itself.

Looking through the WCC website, and using their google web search engine, I came across an EAPPI report from 2003, (the Ecumenical Accompaniment Programme in Palestine and Israel, its Finnish website is a regular dispenser of anti-Israel propaganda) in which was noted that “there is less agreement on what it means to be a minority in the midst of a Muslim majority”, and then provides two contrasting opinions, one describing discriminating practices against Christians, while the other praised Arafat for including Christians in areas of leadership. What is most telling, is the main thrust of the report itself, that being “the occupation” being the major culprit, not Muslim intimidation. This of course is a totally false assertion, f it were true, Muslim demographics would reflect a similar trend, which is certainly not the case.

Also found in the WCC site is a newsletter from 2002, by the Lutheran Bishop of Jerusalem, Munib Younan (one of the Finnish Archbishop’s sources), in which he extols the goodness of the late PLO Chairman, Yasser Arafat, for expressing “his gratitude” for the presence and support of the Palestinian Christian community. Arafat’s real “gratitude” expressed towards his “dhimmi” Christian minority, was in his systematical dismantling of the Christian majority in Bethlehem:

“About 12 years ago the city of Jesus’ birth had a population under 100,000 that was roughly 60 percent Christian. Unemployment, thanks to commerce with nearby Jerusalem and a steady tourist trade, rested at just 2 percent. That changed after Israel signed on to the Oslo accords in 1993 and began turning over towns in Gaza and the West Bank to then-Palestinian Authority chairman Yasser Arafat. In 1994 Mr. Arafat redrew Bethlehem’s municipal boundaries to incorporate three Palestinian refugee camps-adding 30,000 Muslims to the city’s roster. Mr. Arafat championed Muslim immigration to Bethlehem from nearby Hebron, a city also newly given to his control.”

Since the passing of Arafat, the gauntlet has been passed to the Hamas, though Fattah is just as pleased with the dhimmitude of the infidel Christian Arabs. The Palestinian Lutheran Bishop, Munib Younan, has since then continued with his “colored version” of affairs within the P.A. in spite of all the evidence to the contrary, which is reflected in the silence by the leaders of the Finnish Church. In an article published by the Jerusalem Post, “Bethlehem Christians claim persecution”, journalist Khaled Abu Toameh documents the tragedy befalling this battered community.

“According to the families, many Christians have long been afraid to complain in public about the campaign of “intimidation” for fear of retaliation by their Muslim neighbors and being branded “collaborators” with Israel. But following an increase in attacks on Christian-owned property in the city over the past few months, some Christians are no longer afraid to talk about the ultra-sensitive issue. And they are talking openly about leaving the city. The situation is very dangerous,” said Samir Qumsiyeh, owner of the Beit Sahur-based private Al-Mahd (Nativity) TV station. “I believe that 15 years from now there will be no Christians left in Bethlehem. Then you will need a torch to find a Christian here. This is a very sad situation.”

Just how much longer will the situation be allowed to deteriorate before the last departing Christian Arab is asked to “please turn out the lights“? *L* KGS