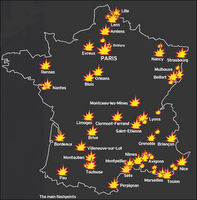 “We are in a state of civil war, orchestrated by radical Islamists,” said Michel Thoomis, secretary general of the Action Police trade union. “This is not a question of urban violence any more. It is an intifada, with stones and firebombs. You no longer see two or three youths confronting police, you see whole tower blocks emptying into the streets to set their comrades free when they are arrested.”

The French government has ordered 4000 Gendarmes to reinforce police departments throughout France. Muslim drug lords are working in concert with radical Islamists to ensure that their own “Muslim turf” is free from non-Muslim rule. French President Jacques Jirac has poured millions of Euros into the troubled areas to help quell the unrest, hoping that the extra funding would go to addressing valid complaints which in turn would help stem the violence.
Apparently that hasn’t worked. The areas in question have seen very organized resistance to French imposed rule, with the local populace freeing those arrested faster than the police can react. Obviously the Muslim/criminal axis is dictating who will rule where. The question that remains is, just how long will the politicians forgo a curfew or even martial law, that is needed to get their streets back under the sovereign rule of France? Embarrassing or not, the French have to take authority in every sector of their country, in much the same way as the Beirut government has to be sovereign over all of Lebanon.
I find it ironic that France leads the Unifil contingent in southern Lebanon at the same time, on an average, 112 cars a day are being torched in its own cities. The French are loathe to admit that they have a serious uprising happening throughout France. How long before they admit it and take serious action to stop it? More here. KGS