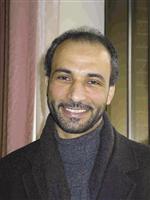 Tariq Ramadan, (the smiley Islamist pictured) a Swiss Arab intellectual and activist/provocateur for Islamism in Europe, has been outed in a series of recent articles/book, for not being the “real deal” he pretends to be. In short, Ramadan is an anti-modernist Muslim, a European Islamist activist in reformist clothing”. That he has been very successful in projecting an image of moderation, all the while refusing to condemn outright, the barbaric practice of stoning adulterers to death, proves just how formidable of a challenge he represents.

He is successfully pedaling an Islamist message to Muslim communities in the heart of a liberal Europe. right under the noses of its political/academic elite, which gives him a veneer of credibility. Europe it seems, has a vast amount of royal red carpet. Perhaps if they would focus on Ramadan’s background, who like Arafat (related to the WWII Nazi war criminal Ajj Amin al-Husseini, the then Mufti of Jerusalem) is related to an Islamist extremist, being the grandson of the founder of the Muslim Brotherhood, Hassan al-banna, an Islamist demagogue who provoked Egyptian Muslims into attacking both its Coptic and Jewish minorities.

The Weekly Standard has it:

“By 2004 Ramadan was de facto spokesman of the French Muslim community, spending most of his time in Lyon, France’s second-largest city, instructing the young Muslim population. His charisma and gift for public speaking made him a hit in the French suburbs, where high-rise public housing projects have become Islamic ghettos. Ramadan cultivated a “moderate” reputation by taking part in interfaith seminars and sitting on a commission on “Islam and Secularism.” Indeed, some view him as a brilliant intellectual preaching a modern and tolerant Islam. The European Union has made him an adviser on religious issues.’

But not all who know him are buying. One of Ramadan’s interfaith partners, Fr. Christian Delorme, had this to say in 2001:’I am today convinced–and it took me time to understand it–that Tariq Ramadan’s thinking and actions are dangerous. I believe he is not at all a man of dialogue. He knows how to charm his audience, but in reality, he wants a total separation between Muslims and other communities. I am convinced that Tariq Ramadan deeply hates the West.’ “

“I know you, Tariq Ramadan. I know all about you. You do not fool me.” (This is not verbatim, but my recalled summary, distilling the essence of Magdi Allam’s comment. Robert Spencer)

This guy is the rest of the free world should take a closer look at, who is not deserving of a red carpet ……but a stiff arm. More here. KGS