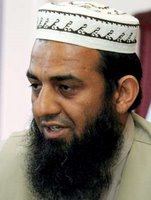 More denial over 9/11 from the representatives of that religion of peace and tolerance, Islam.

“Asked for his honest opinion on the terrorist organization al-Qaida and Osama bin Laden, the imam said “I think this is something that’s been made up.” He also questioned whether the September 11 attacks were actually orchestrated by Muslims, and lent credence to so-called “conspiracy theories” that suggest otherwise.

Among them is one, portrayed in an American movie, that the American authorities themselves were behind the attacks. Imam Zulqarnain Sakandar Madni said he thinks “there’s some good evidence that Bush & Co were behind this. See the film that’s called ‘Loose Change.’ An American film! “

The imam stated repeatedly that Islam “doesn’t allow anyone to kill or injure civilians.” He stressed that Islam “is a religion that teaches people about peace and love.”

It’s not to say that the majority of adherents to the Islamic faith do not in fact teach about peace and love. I do wonder though, what the majority of Islamic teachers around the world are saying in their schools, about that “peace and love” extending past religious boundries? That irrational conspiracist theories engulf the Muslim world rather easily, as the recent MEMRI video accurately depicts, gives doubt to whether the “peace and love” of Islam is being extended to the other religions, like Judaism and Christianity. Especially when the former is being blamed for every imaginable ill affecting the Muslim world. To the Imam’s credit, he repeatedly called for more respect to be shown by all, I can only hope that he is consistant with this message in his own congregation, and in international gatherings with his co-religionists. More here. KGS