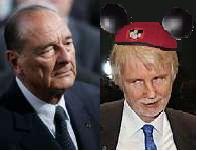 According to the French news daily L’express, French President, Jacque Chirac in a conversation with his Foreign Minister, Philippe Douste-Blazy, during the Council of Ministers of August 30 in Finland, is supposedly to have made an offhanded remark about Finland’s Foreign Minister, Erkki Tuomioja:

“Finland’s Foreign Minister, Erkki Tuomioja is a zero and incompetent over his handling of the Lebanon crisis during these past few weeks.

“the French have been on board with the Finnish MFA’s handling of the Lebanese war situation. The article by L’express is a canard.”

The next day (today 8.9.06) on a state TV morning program(YLE’s Aamu TV), “Eki” said in response to a similar worded question;

“This is an election year in France, all sorts of things come up”.

Maybe, but it seems to me that Tuomioja is backtracking from his original statement of the story being utterly false, and is now trying to place the quote in the context of French domestic politics during an election year. Either way, it doesn’t explain why a remark about a Finnish politician has anything to do with France’s domestic politics, nor that the statement was patently false. As someone recently mentioned to me, “I understand the words ‘nul’ and ‘incompétent’ and couldn’t agree more.” KGS