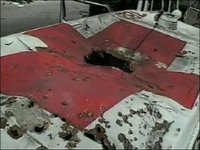 As more and more evidence is being compiled by those in the blogosphere (exm: Zombietime.com), concerning the supposed AIF air strike on Lebanese ambulances, the credibility of the orginal story has taken a serious “nose dive”. This is not the first time stories originating from the ME that cast Israel as being responsible for “massacres and war crimes“, have been proven to have been false.

This all of course stinks, and causes deep scepticism over anything the media reports on, when it concerns an event involving the Israeli defence forces(IDF). The crucial issue is, that we need to acknowledge in the recent Lebanon crisis: The need to recognize that the media is a tool, and that it can serve as a weapons system. Hizballah is ten years ahead of Israel in the ability to use and manipulate the media for its own strategic purposes, and has earmarked a budget of $15-20 million a year for its own TV station, Al Manar. That is more than the overall public relations budget of the State of Israel, $9 million!

The attached article by Prime Minster Ehud Olmert’s Foreign media advisor, Ra’anan Gissin, and the example of the Red Cross Ambulance Hoax sum up the crucial issue: there is not only one real war going on in the Middle East, there are two: a war over territory and a war over minds. Terrorist states and groups are gradually winning the latter by “careful manipulation of evidence”, like the Red Cross Ambulance Hoax shows, and by managing to distribute this false evidence globally through “Iran’s willing executioners” – not only Hizbollah but also its “friends”, the Western media.

Gissin:
“On the Lebanese scene, through the careful manipulation of evidence, the theater of war has turned into a crime scene. Every action that Israel takes in Lebanon – with its densely populated villages that Israel must operate in because that’s the only way that we can uproot the terrorists in them – creates an opportunity for the other side to use public diplomacy with global ramifications. Thus, instead of the war being about Israel’s right of self-defense, Hizballah was able to turn it around so that the issue on the international agenda became Israel’s destruction of Lebanon and Israel as the cause of world instability. The victim becomes the criminal.” More of Gissen’s thoughts here.

I coudn’t agree more. What’s even more troubling, is that there are certain analysists that frequent this blog, that can’t be persuaded “one way or the other” by the mounting evidence which is proving this “latest fakery”, to be just that….fake. That Israel would intentionally target an ambulance or even a UN observation post with the full intent to inflict harm, regardless of the useless military benifit, is lost on some of these “experts”. I believe it harkens to a culture (being the collective representation of a society’s individual values and value systems) in which people are raised, that gives rise to the unthinkable, regardless that common sense dictates otherwise.

As a friend recently quipped: “underlying this is the willingness of the Western media and public to believe the story. There are plenty of crime scenes (eg Iraq, Darfur) every day but they just don’t make a public impression. The West has a story or discourse concerning the Jews–benighted people who didn’t see the Truth, and now stand in the way– and Hizbollah has, cleverly or accidentally, fit Israel into this. So we need to chip away at the underlying assumptions in order to undermine the Hizbollah approach. They need to hate the Jews less so that they can respond to Islamic imperialism more. It is as the West were coal miners, and they fail to react when the canary dies in the mine because they hate the canary more than they fear the gas.”

Old bigoted stereo types of Jews being more prone to excessive violence, revenge, along with the propensity for the letting of non-Jewish blood, still exists within mainstream society, with the majority who are prone to this type of “built in bigotry” being completely unaware of it. Old myths/canards die hard, even within the most progressive of circles, who believe that their “progressive credentials” automatically immunizes them from any viral strain of bigotry. KGS