In his letter to HRH Elizabeth, Gerard Batten also told the monarch she should never have approved the 1992 Maastricht treaty.

The leader of Ukip has written to the Queen to suspend parliament until after Brexit to stop Remainers keeping the UK in the EU.

In his letter Gerard Batten also told the monarch she should never have approved the 1992 Maastricht treaty.

The treaty brought the European member states closer together but Mr Batten believes it was “unlawful and treasonous”.

Mr Batten took over as Ukip leader after the disastrous tenure of Sir Henry Bolton.

He has helped sort out the party’s finances but his increasing tack to the right and close contact with far right activist Tommy Robinson has led to a number of high profile members, including Nigel Farage, quit the party.

In his letter Mr Batten told the Queen that some MPs elected on manifestos to uphold the referendum result are attempting “by all and any means to thwart” Brexit.

He said they are “in breach of their pledges to you and us, your citizens, and of a long-standing Constitutional convention whereby Parliament must implement the will of the people expressed in a popular vote and are bound by electoral manifestos which have received popular assent at General Elections,” he wrote. 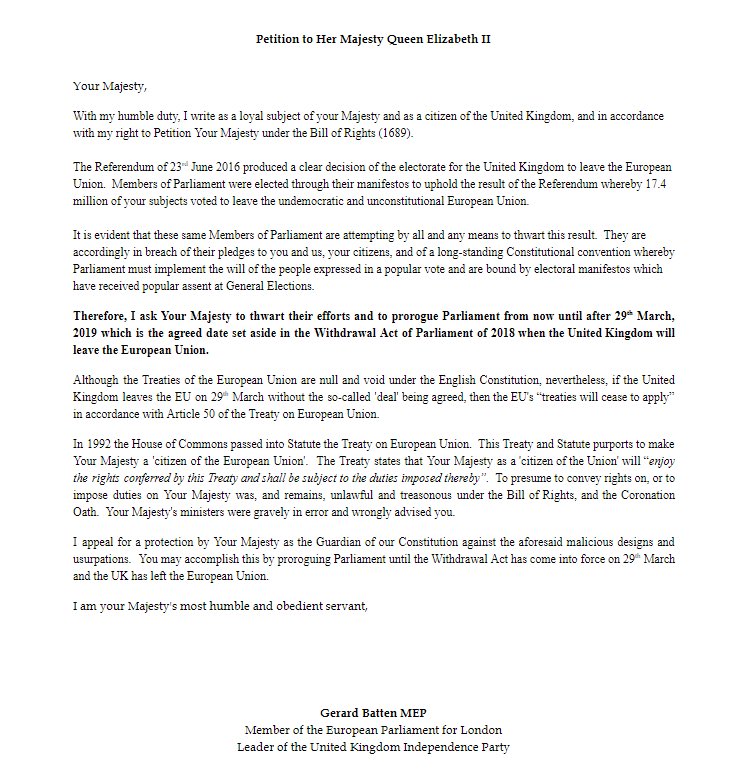