This shows how twisted the Jewish Left is as much as their Christian counterparts.

Leftism is twisted, it warps the brains of whoever embraces it, their cognitive powers of reason and rational thinking go straight out the window. Just think of the radical feminists who fall in line with the Islam 101’ers that the hijab, burka and niqab are freedom garbs for personal female empowerment. Muslim head of J Street U urges pro-Israel organizations to fight Israel’s “Occupation” in order to gain allies, in an op-ed at the JTA.
By: Lori Lowenthal Marcus
Published: January 15th, 2016 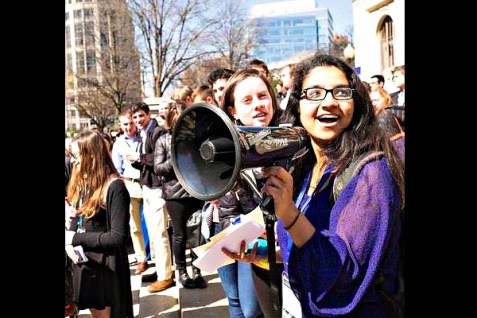 Yes, it’s now gotten to the point where the Muslim student president of the self-described “pro-Israel” J Street U is given the forum of the Jewish Telegraphic Agency to tell Jews to be better pro-Israel advocates by fighting Israel’s “Occupation.”

J Street U gave this University of Maryland student a megaphone which she’s using to attack Israel, and now she’s being given a “Jewish” media outlet to amplify her anti-Israel, pro-Palestinian Arab message.

Amna Farooqi, the J Street U president, seized upon another editorial from another leader of a Jewish organization brought to you by the JTA, David Bernstein of the Jewish Council on Public Affairs.

Bernstein, in turn, was warning Jewish Americans that in order to defeat the BDS (Boycott of, Divestment from and Sanctions against Israel) Movement, Jews should start developing partnerships with various social justice groups “on the mainstream left.”

Bernstein wrote that the BDS movement is teaming up with other “social justice” organizations to together fight against Israel, and so he urged pro-Israel folks to ape this coalition building and thereby fight this “intersectionality” of “other oppressed groups” making alliances with anti-Israel groups.

Farooqi suggests the coalition pro-Israel groups should join are those progressives who are attacking Israel for engaging in the “Occupation” of Palestinian Arab land. No joke.

NOTE: Leftism has done more to disenfranchise the individual, retard nations and stoke the flames for future conflict than any ideology outside of Islam, no wonder they’re bedfellows.