What the hell is “Exclusive” @Reuters ? It has been in Islamic doctrine for centuries! //t.co/WoMh73XdxT 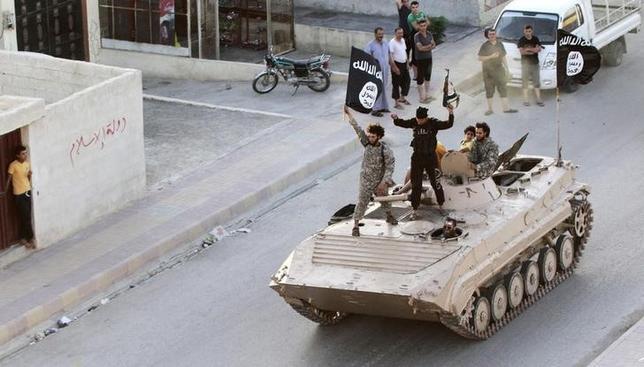 Militant Islamist fighters hold the flag of Islamic State (IS) while taking part in a military parade along the streets of northern Raqqa province in this June 30, 2014 file photo.
REUTERS/STRINGER/FILES

Islamic State theologians have issued an extremely detailed ruling on when “owners” of women enslaved by the extremist group can have sex with them, in an apparent bid to curb what they called violations in the treatment of captured females.

The ruling or fatwa has the force of law and appears to go beyond the Islamic State’s previous known utterances on the subject, a leading Islamic State scholar said. It sheds new light on how the group is trying to reinterpret centuries-old teachings to justify the sexual slavery of women in the swaths of Syria and Iraq it controls.

The fatwa was among a huge trove of documents captured by U.S. Special Operations Forces during a raid targeting a top Islamic State official in Syria in May. Reuters has reviewed some of the documents, which have not been previously published.

Among the religious rulings are bans on a father and son having sex with the same female slave; and the owner of a mother and daughter having sex with both. Joint owners of a female captive are similarly enjoined from intercourse because she is viewed as “part of a joint ownership.”