This is a classic example of never accepting the opposition’s talking points, even some of them, in order to bridge the divide that exists between the sides, because it’s a mug’s game, they invent the rules, then change them, in order to further twist in the knife. They simply should never have been given any kind of credibility whatsoever.

Hillel CEO tries to speak about common position against BDS, J Street U students want him to say “occupation” is the reason for BDS.
By: Lori Lowenthal Marcus
Published: August 18th, 2015 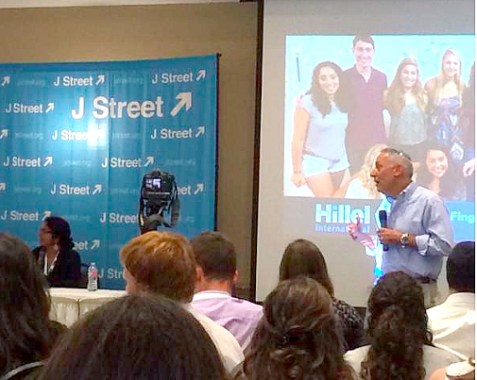 Lots of campus organizations have their retreats in the summer. It’s a time for energizing the members before they return to campus in the fall.

J Street U, the campus arm of J Street, is having its Summer Leadership Institute this week, just outside of Washington, D.C.

On Monday, Aug. 17, Hillel International’s CEO Eric Fingerhut addressed the organization that claims to be pro-Israel. Fingerhut was looking to stake out common ground. The only issue the J Street U students wanted Fingerhut to discuss, however, was the Israeli “occupation” of the Palestinian Arabs.

Fingerhut was invited to address J Street’s SLI back in June, when he met with J Street’s leadership to discuss ways the two organizations could work together. The June meeting took place after Fingerhut, who originally agreed to speak at J Street’s annual conference, pulled out of that commitment.

After Fingerhut’s no-show at the March J Street Conference, a mob of J Street conference attendees descended on Hillel’s Washington, D.C. headquarters, demanding to know why Fingerhut refused to address their event. They pasted post-it notes haranguing Fingerhut for canceling on them, along with a box of letters demanding a meeting with him.

The Hillel leadership concluded that Hillel and J Street U share a mutual interest: opposing the BDS (Boycott of, Divestment from and Sanctions against Israel) Movement. It was on this topic that Fingerhut planned to speak at the J Street U’s SLI.

Fingerhut, according to J Street U members present, said he “applauded” the campus group for opposing BDS, and told them “we appreciate what you do in building vibrant Jewish community.”

He also sought to mollify them by feeling their pain, as when he told them “sometimes you have also been subject to unfair criticism. That is wrong too and contrary to Jewish principles.”

But despite the earlier agreement, this time it was J Street U’s turn to pull the rug on Fingerhut.

With Fingerhut seeking to establish common ground, J Street U leadership members and the organization itself seemed to mock Fingerhut on social media: “.@eric_fingerhut repeatedly calls for common ground b/w @jstreetu & @HillelIntl. We will never compromise on condemning occupation. #SLI2015”

J Street U and its members tweeted throughout Fingerhut’s address to the students, with most of the messages demanding to know whether Fingerhut would “acknowledge the occupation threatens Israel’s Jewish and democratic future as much/more than bds?”

There also was clearly a generation gap problem, with J Street U students incredulous that Fingerhut appeared to be boasting that “@HillelIntl is opposed to racism and islamophobia.” The students wanted none of the liberal credentials being offered: “Jewish leaders, lets be clear: mentioning Jewish solidarity w/ civil rights in the 60s doesn’t mean you uphold those values today.”

But the constant refrain was annoyance that Fingerhut was not addressing the issue foremost on the minds of the J Street U members who were listening to the Hillel executive: Israel’s “Occupation” is the central issue and absolutely their central concern.