This is in regards to Elisabeth’s fine that she received after her appeal of being convicted for “hate speech” (speaking the truth about Islam and it’s founder) was rejected by the Austrian court. KGS 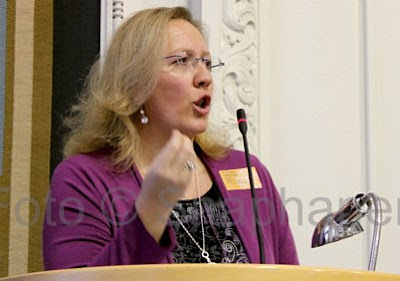 From the Gate of Vienna: As we reported last month, when Elisabeth Sabaditsch-Wolff appealed her “hate speech” conviction to a higher court in Austria, the earlier verdict was upheld. She stated afterwards that she would not pay the fine. To do so would effectively recognize the legitimacy of an unjust and tyrranical legal decision.However, it turned out that it was impossible not to pay the fine: the Austrian judicial system has ways of compelling compliance. What happened to Elisabeth is described in the essay below.

Why I decided to pay the fine

This past Thursday I asked the notary public in charge of my defense account to pay the now infamous €480 I was fined for my words the Austrian state deemed “an excessive assessment.”

You will recall that I was adamantly opposed to handing over nearly €500 to the government. I still feel this way. And I am still willing to go to jail. However, the legal constraints imposed on me have forced me to change course, and hand over money to the very state that has prosecuted and criminalized me for speaking the truth.

This is the story of what happened.

What was omitted from the court’s pronouncement was the fact that there is a step between the payment of the fine and going to jail: the bailiff would enter my family’s apartment with a warrant in an attempt to collect something worth €480. This might be anything, from my laptop to jewelry to the sofa.

Only if he were unable to make the necessary collection would I have to go to jail. In order to manage that, I would have to assault the bailiff — something that goes against my nature. So I really had no choice: I would have to pay the fine, one way or the other.

I found out about all this only fairly recently. As a result, I made a quick decision: I would pay the fine, much as I hated doing it.

My daughter’s well-being was also factored into the equation. Although she was a beacon of strength during the trial, I noticed a gradual change in her. She was clearly suffering, and that is something that I as a mother could not accept.

I believe in standing up for free speech, even if I put myself at risk. But I will not put my daughter at risk. The Austrian state has already victimized me. I will not permit them to victimize my daughter, too. It is my obligation as her mother not to do something that would scar her for life. If my daughter suffers, I suffer as well.

Rest assured that I loathed paying that fine. I still strongly resent the state’s decision to limit my freedom of speech.

I will continue my protest. We are not giving up, but merely changing our tactics.

I ask you to continue to support me and my fight for the right to freedom of speech. By extension, I am fighting for the rights of everyone, including those who are unaware that their rights are under threat.

If we do not stand up for our freedoms, we will lose them. Therefore I will continue to stand strong.

With your help, freedom will prevail!

My paying the fine does not mean I will cease fighting the verdict. As a matter of fact, if I raise enough funds, we can and will take this to the European Court for Human Rights.

Anyone who wants to contribute may visit Elisabeth’s Voice and make a donation using PayPal. Or, if you prefer, you may send a bank transfer using the following information for international payments:

Made out to: Public Notary Mag. Martin Scheichenbauer, Hemmaweg 5, A-9342 Gurk