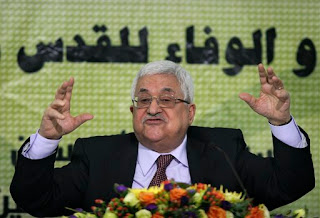 Abbas: We give up nothing and demand everything,
that’s the way we’ve been doing it and Obama agrees
This is the game folks, the Arabs reject honest negotiation, ramp up the violence and then cry victim, but this time around they have an American president in their corner, Obama, providing them the rationale to continue their behavior. KGS
Abbas urges Obama to impose peace deal

RAMALLAH, West Bank (AP) – Palestinian leader Mahmoud Abbas urged President Barack Obama on Saturday to impose a Mideast peace deal, signaling the Palestinians’ growing frustration after nearly two decades of failed negotiations with Israel.
Palestinian officials have said privately that they believe only strong U.S. intervention can break the impasse with Israel. Still, Abbas’ blunt public appeal Saturday was unusual.
In a speech to leaders of his Fatah movement, the Palestinian president noted that the Obama administration has defined the creation of a Palestinian state alongside Israel as a strategic U.S. interest.
“Since you, Mr. President and you, the members of the American administration, believe in this, it is your duty to call for the steps in order to reach the solution and impose the solution—impose it,” Abbas said. “But don’t tell me it’s a vital national strategic American interest … and then not do anything.”
The traditional U.S. position has been to act as a mediator, while treating Israel and the Palestinians as equal partners who in the end must make their own decisions. Critics have said this approach does not take into account the imbalance of power—that Palestinians live under Israeli military occupation.
Earlier this month, The Washington Post quoted Obama administration officials as saying the president is considering proposing an American peace plan for the Mideast. Since then, however, top U.S. officials have reiterated the traditional view that the U.S. can help, but that the final decisions lie with Israelis and Palestinians.