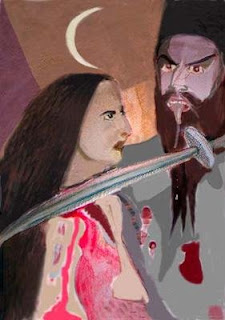 The YLE article never once mentions Islam in relation to the “violence” being meted out to the females that dare risk running afoul with the male members of their tribe. Overall the message is clear, ethnic Finns are for the most part clueless as to why “certain women have great constraints placed upon their individual freedoms, which at times may lead to violence against themselves by their family members or relatives. KGS
NOTE: This time around the TT tips its hat to YLE for publicizing this, the TT would also ask the reader to please check out the video Vlad Tepes and the Tundra Tabloids translated and subtitled and uploaded to Vimeo, about honor related crime in Finland, that was first made public in a TT post last year.

Some groups of immigrant women in south west Finland’s Uusimaa district may be becoming increasingly vulnerable to honour crimes. The Uusimaa chapter of the Mannerheim League for Child Welfare has received tips relating to about 100 suspected honour crimes over the past three years, and says the number of such incidents is growing steadily.
There are no official statistics on the spread of such practices, but the League estimates that its information represents just the tip of the iceberg. The League is most often contacted for guidance on matters relating to child welfare and schooling.
In response to the emerging trend, the League recently launched an online info pack on the issue of honour crimes. Project Manager Marjo van Dijke hopes that the web pages will help victims to take action.
“Many people find it difficult to speak about this issue with their clients. Hopefully this will provide guidance on what to ask, how to discuss the matter, and what kinds of consequences there might be,” she explained.
Difficult Subject for Finnish Men
The League’s web pages also provide advice for the Finnish friends of immigrant girls, as Finns often find it difficult to understand why their friends don’t have the same kinds of freedoms that they enjoy.
Another key target group for the web campaign is Finnish men, who may be interested in women coming from backgrounds in which honour crimes are practiced.
“A woman’s freedom determines moral expectations and behaviours related to morality and chastity have created challenges for many Finnish men as they don’t know how to proceed and what they can do in practice,” said the League’s van Dijken.
Honour Crimes Assume Different Forms
Honour crimes may involve physical violence or may be exercised in restrictions, for example in dress codes, relationships or even hobbies.
The practice may be seen not only in certain immigrant groups, but may also be experienced in multi-cultural families.

Honour killings in Finland from Vlad Tepes on Vimeo.