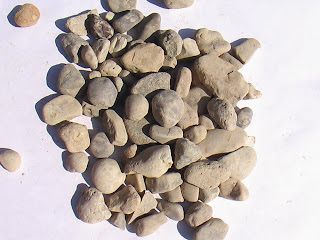 Followers of  MO:
These stones were made for throwing
In the heart of Ol’ al-Andulas, Islam’s mythical playground of brotherly love, where all three faiths lived in peace and harmony. Folks, it was that close. If not for the stroke of luck that allowed this hapless pregnant woman to escape her fate, she would have ended up another victim of the Ideology of Perpetual Outrage (IPO).  KGS

(by Paola Del Vecchio) (ANSAmed) – MADRID, DECEMBER 8 – The reported capturing of a Muslim women in Reus (Tarragona) and the issuing of a stoning sentence for adultery by religious fanatics are a gauge of a phenomenon that has already appeared in Holland and France, and which is now taking root in Catalonia: the creation of Islamic “moral brigades” by fundamentalists, who claim the role of judges and police officers imposing a strict observance of Sharia, or Islamic law.
The theatre of the incursions of these Islamic “moral patrols” are the rural towns where the mosques are controlled by Salafists, a fundamentalist sect of Islam, with a substantial presence in the province of Tarragona. These groups are heavily inspired by the Koran and the rigid regulations applied in countries such as Saudi Arabia and Nigeria. Confirming investigators’ worries are several disturbing episodes reported by police. Specifically, on November 14, nine alleged Islamic extremists were arrested, accused of having captured and sentenced a Northern African woman to death after convicting her of adultery.
The investigation, still in the preliminary phases, is classified. However, according to reports in the media, the woman was captured and held for three days in an abandoned factory, and then in the home of the group’s spiritual leader in Reus, where she was tried before an “Islamic tribunal” made up of seven people, who found her guilty of infidelity and sentenced her to death by stoning.
The woman, who was pregnant, managed to escape and call the Catalonian police, the Mossos d’Esquadra, for help, and she is currently under their protection. In the meanwhile, the operation against the fundamentalist cell is ongoing. Investigators have warned that the phenomenon of these “brigades”, which could increase, has not only been found in Tarragona, but also in the provinces of Girona and Segarra, where mosques are controlled by Salafites.
Many of the victims do not dare report their persecution, and intimidation continues for them. Investigators have confirmed beatings and segregation by their parents or spouses of women who do not wear veils, and the case of a Moroccan teenager who was beaten because he played football with other non-Muslim children.