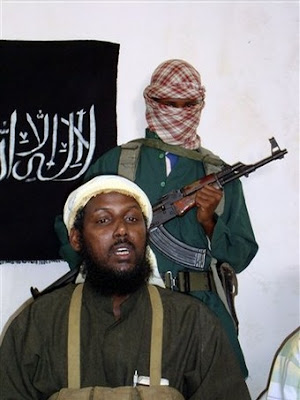 Al-Shabab Islamo-thugs:
We can’t wait to dispense ‘justice’, the Islamic way!
Two Frenchmen kidnapped by jihadi thugs are now waiting to be tried by the very same system of medaevil law many in Europe have resigned themselves to allow. Brilliant. If the French government had any stones, they would be demanding the Somali jihadis to return their men, or face overwhelming fire power until their safe return. KGSSharia Trial Looms for Frenchmen Kidnapped in Somalia

Somali insurgents say two French military advisers kidnapped this past week from the capital, Mogadishu, will be tried according to sharia, or traditional Islamic law.

A senior member of the Islamist group al-Shabab on Saturday said the two men are charged with spying and working for the enemies of Islam. The official spoke on the condition anonymity.

Armed kidnappers snatched the French nationals from their hotel in central Mogadishu early Tuesday. The French Foreign Ministry says the men were on an official mission to provide assistance to the Somali government.

Al-Shabab has been fighting to overthrow the Somali President Sharif Sheik Ahmed, a moderate Islamist. The Somali government accuses al-Shabab of having links to al-Qaida terrorists.

The nationalities of the humanitarian workers and the organizations they work for are not immediately clear.

Somalia is chaotic after 18 years of internal strife, and foreigners are frequent kidnap targets. Kidnap victims usually are released unharmed, but in many cases only after a ransom is paid.