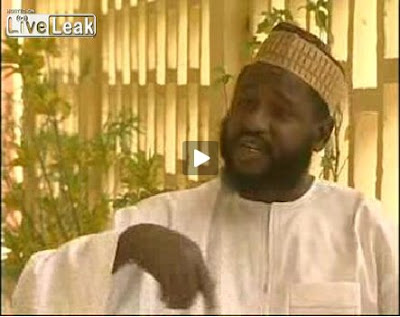 “Sharia law is my ambition and that is
the ambition of every Muslim in this country”
That’s the reason for Jihad. Forget about all the supposed reasons for Islamic terrorism, like poverty, inequality and oppression by the infidel. The real reason for Jihad is to install Sharia wherever devout Muslims control a parcel of land. In Nigeria, there are seven states that have become sharia governed, and it’s only a matter of time before the rest fall, unless there is a sudden increase of resistance.
The non-Islamic stooges in the West who call for Sharia law to be implemented, due to respect for “other cultures”, are guilty of placing the neck of our own Western way of life on the chopping block of ancient Islamic madness. These useful idiots are undermining our own system of law and liberal values, for the near sighted vision/goal of propping up the social welfare infrastructure through the mass immigration of 3rd world immigrants from Muslim countries.
The insane policies of the Internationalist Socialists are loading us up with a massive number of people who are proving themselves incapable of integrating themselves into our Western societies. They are bringing our societies into a collision course with not only Islam, but also with the marginalized (real) National Socialists who don’t want to see massive number of immigrants sucking on the teat of their socialist states.
Those of us caught in the middle have been warning about both dangers, hence the need for the Left to be made aware that their own policies are creating a societal nightmare, and hence the need to scale back on these destructive policies before they ruin our countries once and for all. Sharia is a real danger to our Western way of life, and like the use of garlic in a meal, there is no such thing as using “just a pinch of it”, because it permeates the whole meal, no matter how slight the portion used. KGS