Skip to content
Home
/
2009
/
July
/
10
/
Uncategorized
/
Tundra Tabloids Meets With the United Iranians Against the Islamic Regime of Iran…….
Facebook
Twitter
Google+
LinkedIn
Pinterest
These women have had it
with the Mullah run thugocracy
called the Islamic Republic of Iran 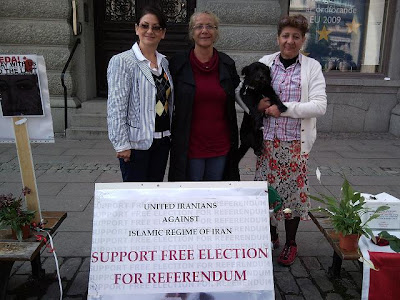 The Swedish government
refuses to meet with these brave womenStanding up for freedom and democracy, Neda, friends and colleagues stand with their signs and pictures, helping to spread the word in the streets of Stockholm about what’s really happening inside their country of Iran. What’s as depressing as the photos in their protest display, is the fact that the Swedish government has refused to meet with these women, or anyone else that have been demonstrating their support for the freedom fighters risking their lives in the streets of Iran.This particular group of ex-pat Iranians have placed their signs just outside the Swedish King’s palace which sits at the entrance to the old city of Stockholm, as well as being just across the short bridge from the Swedish House of Parliament. They have been there since the beginning of the protests in Iran, and have no plan of leaving soon.One of the women in the group, pictured in the center, stated what the Tundra Tabloids had been saying (as well as Pamela Geller from Atlas Shrugs) that there are a host of competing voices currently protesting against the Islamic regime. She also stated that many who have taken to the streets are not protesting in favor of a “softer Islam” to replace the highly corrupt religious regime, but to replace it with a secular government ruled by civilian law, which means no to shariah, or Islamic law.They have had it up to their eyeballs with Islam, and these particular protesters are against it entirely, they are also anti-Communist, pro-Western, pro-Israel and philo-Semitic. They view Israel as a part of the civilized West and have contempt for Western politicians, feminists, and for a host of other “humanitarian stooges” who prostrate themselves before the “Palestinian cause”. Saying that “the West has wasted enough money on them already”. They see in the Palestinians (Fakestinians) the same totalitarianism displayed in Iran, Lebanon (Hezbollah) and Al-Qaida.Here is the text of the letter they sent to the current head of the Swedish government, PM Fredrik Reinfeld. It’s a letter that spells out the protesters demands. Also noteworthy, is the fact that they (these women) have realized that the color of green is being misunderstood outside of Iran, as being sympathetic towards Islam, Neda and others stated that that’s not the case, it just signifies change and freedom. They said in retrospect, they should have used something else. KGS 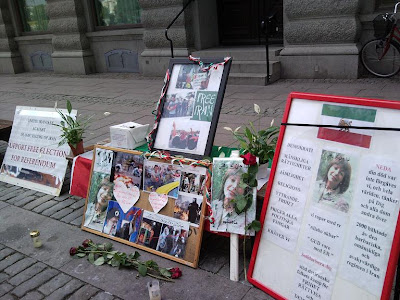 H.E. Fredrik Reinfeld
College of Commissioners
European CouncilWhat do the protesters want?If this question were a college course, it would be taught at the 101 level. Not because the subject matter is simple, but rather because what the people who are protesting in Iran want is very basic. All the sophisticated analyses of the talking heads and academics, as well as the rationalizing of the political elite not withstanding, what the people want can be summed up as follows:

What the people who are protesting want is Freedom From Fear. They want to be able to live their lives with their families and friends, and loved ones without being afraid all the time. We need to support them and tell them that we are with them and that we support their aspirations for a Free & Democratic Elections. This is not meddling; this is a basic right in any civilized nation. Freedom from Fear is a Universal Human Right. What they want is for the Free World to help them get rid of this Fear, known as the the Islamic Republic.NOTE: These protesters were unanimous in their distrust for Mir Mousavi, they were clearly not protesting in favor of his candidacy, but using the unrest and protesting to strike a death blow to the Islamic regime itself. NOTE: Read also Atlas’ Iran Revolution Day 26: Thousands Return To The Streets In Iran, Shootings Reported