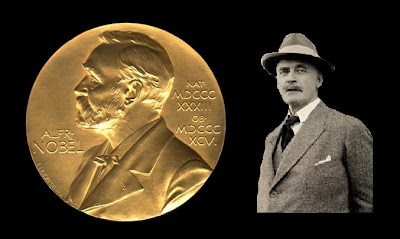 Pro-Nazi Nobel laureate Knut Hamsung and the prize
he gave to Nazi propaganda minister Joseph Goebbels. The fact of the matter is, the Norwegians (including some Jewish leaders there) are clueless to their duplicitous behaviour, including the director of the Oslo-based Center Against Anti-Semitism, Erez Uriely. The NYT writes that Queen Sonja, upon her leaving the exhibition, said: “I think we’ll have to keep two thoughts in our head at the same time.” Remember folks, the Queen of Norway was speaking about a man who wrote adoringly of Adolf Hitler after WW II and the Holocaust, in the following way: “He was a warrior, a warrior for mankind, and a prophet of the gospel of justice for all nations.”The Tundra Tabloids agrees with Dr.Manfred Gerstenfeld, in that “Norway should never have been allowed to chair the Holocaust task force“, because they are unable to deal with their past. Showering praise upon a Nazi sympathizer, regardless of how great of an author he was, shows a weakness in their national character, that being, a willingness to be blind to the anti-Semitic side of a person or people that they have an affinity for. H/T: Dr.Manfred Gerstenfeld

By honoring novelist and Nazi-sympathizer Knut Hamsun, Norway has damaged the international Holocaust education drive that it has recently been appointed to head, campaigners against anti-Semitism told Haaretz. Yet, the leader of Norway’s Jewish community disagrees. In March, Norway assumed chairmanship of the 26-nation Task Force for International Cooperation on Holocaust Education in the midst of celebrating the 150th anniversary of the birth of Knut Hamsun, the country’s once celebrated author who was shunned for supporting Norway’s Nazi occupation regime during World War II. The government has honored the novelist with celebrations, a commemorative coin and is allocating millions of dollars toward building a cultural center in the Nobel Prize laureate’s hometown, which is to open in August. Hamsun, who died impoverished at the age of 92 in 1952 (the government stripped him of his property) once gave his Nobel Prize medal in literature as a gift to Nazi propaganda minister Joseph Goebbels. He also met Adolf Hitler in Bavaria. The author of masterpieces like “Hunger,” Hamsun is cherished by readers in Norway and around the world.

NOTE: It’s another reason why the Tundra Tabloids regards the Nobel Prize as a non-event, in spite of the fact that Jews have won that award an umpteenth number of times. After Arafat won the prize, it can never be looked at in the same way.