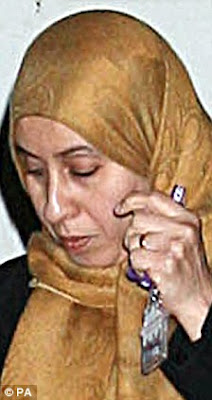 So what if I didn’t take off his clothes,
the boy was cranky and not behaving himself
The brass of some people. The story here is not the missing of a broken back of a child by a doctor, but the failure of the “doctor” to conduct a thorough examination of a child in pain. What makes matters worse is that Al-Zayyat shows no remorse whatsoever, on the contrary, she pulls out the victim card and sues for wrongful dismissal. Well, I can’t say for sure how the Arab Middle East does things, but we in the West don’t take to kindly to doctors who can’t be bothered to give thorough examinations.
If there’s any justice left in Britain, being sacked should be the least of Sabbah Al-Zayya worries, she should be facing time as well. KGS
Sacked doctor who failed to spot Baby P’s broken back
sues hospital for £100,000

The doctor who was sacked after failing to spot Baby P’s broken back is suing for unfair dismissal. Paediatric consultant Dr Sabah Al-Zayyat could be awarded up to £66,200 of taxpayers’ money if she wins her case. Last year she told the Old Bailey that she was unable to conduct a full medical examination of the 17-month-old because he was ‘ miserable and cranky’
In fact the toddler was in crippling pain with a snapped spine and eight fractured ribs – the victim of horrendous abuse by his mother, her boyfriend and their lodger. He died 48 hours later on August 3, 2007, at his home in Haringey, North London. A post-mortem examination revealed more than 50 dreadful injuries.
Saudi-born Dr Al-Zayyat, 53, was the last medic to see the toddler alive and was the first person to be sacked in the wake of the scandal when she was dismissed in May 2008. She was also suspended from practising by the General Medical Council last November. Last night Lynne Featherstone, the constituency MP, said: ‘How anyone who failed to see a broken back or broken ribs is planning to sue for anything is beyond me.