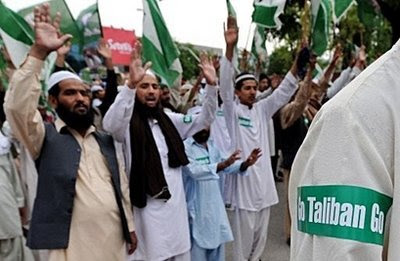 Taliban: All we are saying, is give us those nukes!

The Tundra Tabloids now assumes that Obama’s search for the “moderate Taliban” has officially ended before it even began. The Counterjihad knew that it would end in failure, for their is no such thing as “moderate” in Islam, there’s just Islam. Let’s see how O-bow-ma gets the Pakistanis and the Afghanis to wage war on their co-religionists while winning over the “hearts and minds” of those caught in the middle. The recent killing of Afghan civilians in last weeks raid might set things back a bit don’t you think? KGS