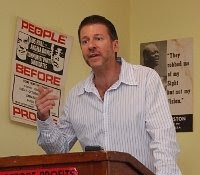 Will Robinson:
You see, I’m a radical Lefty with a Ph.D
so that should explain everything Once again another classic example of higher education gone wrong. William Robinson, a professor of sociology at the University of California in Santa Barbara, intentionally misused the term of genocide, (the deliberate and systematic destruction, in whole or in part, of an ethnic, racial, religious, or national group) in an email to his students, when he compared the Holocaust of the Jews with that of Israel’s defensive campaign in Gaza at the beginning of this year, Operation Cast Lead.

According to the Jerusalem Post, “On Jan. 19 Robinson, sent an e-mail to 80 students in his “Sociology of Globalization” class entitled: “parallel images of Nazis and Israelis.”
“Gaza is Israel’s Warsaw – a vast concentration camp that confined and blockaded Palestinians, subjecting them to the slow death of malnutrition, disease and despair, nearly two years before their subjection to the quick death of Israeli bombs,” Robinson wrote. “We are witness to a slow-motion process of genocide.” 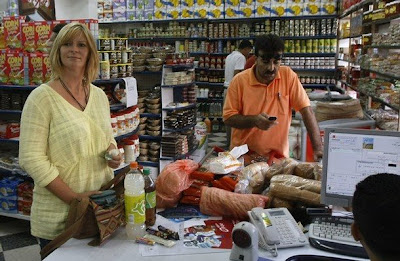 Laura Booth, the sister-in-law to Britain’s former PM, Tony Blair, is pictured starving to death in the Gaza Strip concentration camp last year, with the man on her left about to eat his cell phone in a fit of last minute desperation.The photo of course, helps to show the moral bankruptcy of the man, who knows fully well that there is no “genocide” of the Palestinians happening, not in the Gaza Strip nor in the West Bank. It’s all about politics of the man and his willingness to lie to promote his world view, in which he not only ends up cheating his students, but also belittles the memory of those who truly suffered under Adolf Hitler’s National Socialists. 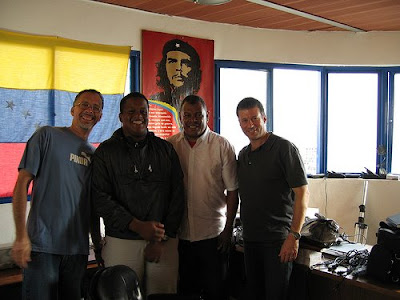 Prof.Robinson (pictured right) in front of his idol in 2006But it doesn’t surprise the Tundra Tabloids one bit that Robinson would blatantly lie to his students about the Jewish state of Israel, these kind of academics loathe the truth, and consider themselves above all the rules that govern everyone else. Che would agree.

US prof probed for Israel-Nazis link

A Jewish professor at University of California, Santa Barbara is under academic investigation and has been accused of being anti-Semitic for sending students an e-mail comparing Israel’s offensive in the Gaza Strip with the Holocaust. Sociology professor William I. Robinson denied the claims on Thursday and portrayed the furor as a threat by Israel’s supporters to academic freedom. Two prominent Jewish groups continued to demand that he apologize. On Jan. 19 Robinson, sent an e-mail to 80 students in his “Sociology of Globalization” class entitled: “parallel images of Nazis and Israelis.” […]Robinson’s e-mail included a forwarded e-mail featuring juxtaposed photos from the Nazi era and the Gaza offensive with similar subjects, including grisly photos of children’s corpses. The e-mail set off a furor on the campus. Two Jewish students dropped Robinson’s class and filed grievance letters with the university, claiming they felt intimidated by his strong and unsolicited opinion and the graphic images. […]I expect to be totally vindicated,” he added. Some UCSB students have formed a support committee and outside academics, including famed philosopher-activist Noam Chomsky and other outside academics have publicly sided with Robinson. The student group plans a campus forum on the matter.

Of course he expects to be fully vindicated, Robinson is so thoroughly self deluded that he actually thinks that he hasn’t done anything wrong. He knows fully well that his academic comrades on the Left, will rush to his aid as they did for pseudo academic and fake Indian, Ward Churchill. 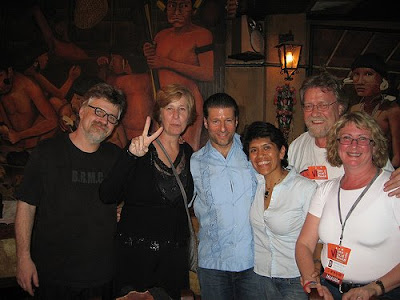 With noted luminaries like Noam Chomsky and Cindy Sheehan in your corner how could you go wrong? KGS

This picture is better, it sums up the TT’s feelings about Sheehan and Robinson to a tee. NOTE: Rabbi Aron Hier, the Wiesenthal Center’s director of campus outreach, said Robinson’s e-mail “demonizes those things that those students care about” and said he should repudiate his remarks.”

In full agreement, but it will never happen though.