Skip to content
Home
/
2009
/
April
/
14
/
Uncategorized
/
In The LGF Lounge: Upfront and Close With the Grand Lizard…….
Facebook
Twitter
Google+
LinkedIn
Pinterest
Yeah I know, the Tundra Tabloids just published the same vid with Gordon Brown playing the leading role, but this is such an excellent twist that I HAVE to run it, alongside the Baron’s post that will follow (in full). Feel the irony as the curtain slides to reveal the little man hiding behind it.

Et Tu, Brute?
by Baron Bodissey
As longtime readers know, we normally avoid posting about LGF’s gradual retreat from any association with most anti-jihad bloggers and writers. Tundra Tabloids has been following this meme, and has created an amusing graphic showing a bus and all the people that Charles Johnson has thrown under it. KGS recently ran out of room and had to expand the picture to add the latest victims.

I know this runs against our customary practice, but I couldn’t let this one pass unnoticed.

One of our readers — who is on CAIR’s mailing list — received a press release today and forwarded it to us. CAIR is alerting its members to an upcoming “Islamophobic” conference in Florida in which Robert Spencer of Jihad Watch will participate. The email included the following paragraph: 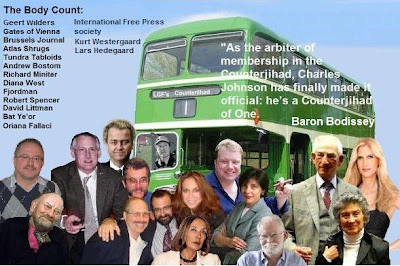 The Little Green Footballs blog, also widely known for its Islamophobic viewpoint, wrote of Spencer’s site: “His website has descended into a true hate site at this point, dominated by extreme, bigoted commenters who regularly advocate genocide and mass murder of Muslims.”

So this is what it’s come to: CAIR is now citing Little Green Footballs to score points against one of the most important Counterjihad activists of our time.

Thanks, Charles. You did us all a real big favor.

And now you can rest easily, knowing that your site is 100% Nazi-free.

“If Representative Hasner truly wishes to represent Florida’s diverse religious and ethnic population, he should immediately disassociate himself and the state legislature from this motley collection of Islamophobes and Muslim-bashers.” — CAIR-South Florida Executive Director Altaf Ali

(WASHINGTON, D.C., 4/13/09) — The Florida chapter of the Council on American-Islamic Relations (CAIR) today called on the leader of that state’s House Republicans to disassociate himself from an upcoming anti-Islam conference backed by a “motley collection of Islamophobes and Muslim-bashers.”

CAIR said Rep. Adam Hasner is on the “host committee” for the April 27 conference in Delray Beach, Fla., featuring Dutch anti-Islam politician Geert Wilders. Wilders was recently denied entry to Britain because of his extreme anti-Muslim views, including urging that the Quran, Islam’s revealed text, be banned.

Other conference backers include Joe Kaufman, a Florida anti-Muslim extremist with a long history of seeking to marginalize and disenfranchise the American Muslim community and its institutions. He has in the past promoted the views of the terrorist organizations Kach and Kahane Chai and praised the Kahane terror group and its founder Mier Kahane on a forum of the radical Jewish Defense League in Florida.

In 2006, Kaufman joined forces with an anti-Islam preacher in Florida to block the expansion of a mosque in Boca Raton. “This mosque should not exist on American shores,” said Kaufman. (St. Petersburg Times, 7/14/06)

In 2003, Kaufman was forced to remove a link to kahane.org on his website after CAIR exposed his efforts to promote the terror group. That same year, the Washington Post reported that the United States added to its list of foreign terrorist organizations “newkach.org, kahane.org, kahane.net, kahanetzadak.com as aliases for the Jewish group Kahane Chai or Kach, which is suspected of organizing attacks on Palestinians.”

Frank Gaffney, one of the event’s other sponsors, is linked to an anti-Islam group that has advocated prison terms in the U.S. for “adherence to Islam” and that questioned whether women and African-Americans should be allowed to vote. Gaffney has claimed that the use of Islamic finance in America is a form of treason. “[I]t is advancing a criminal conspiracy whose purpose is the violent overthrow of the United States Constitution and government in favor of Islamic rule,” wrote Gaffney. (Washington Times, 9/16/08)

Another event sponsor, Pamela Geller, operates one of the Internet’s most vicious anti-Islam sites. Her blog features categories such as “Advancing Islamic Lies,” “Islam 2008: Religion of Barbarism” and “Slavery: An Arab custom.” Geller has even been criticized by other Islamophobes for her extremism and for supporting far-right groups in Europe.

Robert Spencer, who has also been criticized for the extremism exhibited on his anti-Muslim blog, is listed as a conference “coalition partner.” Spencer was recently involved in a controversy over his joining a Facebook group advocating genocide of Muslims in Turkey.

The Little Green Footballs blog, also widely known for its Islamophobic viewpoint, wrote of Spencer’s site: “His website has descended into a true hate site at this point, dominated by extreme, bigoted commenters who regularly advocate genocide and mass murder of Muslims.”

The founder of another conference sponsoring group, Act! for America’s Brigitte Gabriel, told the Australian Jewish News: “Every practising Muslim is a radical Muslim.” She also claimed that “Islamo-fascism is a politically-correct word…it’s the vehicle for Islam…Islam is the problem.”

When asked whether Americans should “resist Muslims who want to seek political office in this nation,” Gabriel said: “Absolutely. If a Muslim who has — who is — a practicing Muslim who believes the word of the Koran to be the word of Allah, who abides by Islam, who goes to mosque and prays every Friday, who prays five times a day — this practicing Muslim, who believes in the teachings of the Koran, cannot be a loyal citizen to the United States of America.”

“If Representative Hasner truly wishes to represent Florida’s diverse religious and ethnic population, he should immediately disassociate himself and the state legislature from this motley collection of Islamophobes and Muslim-bashers,” said CAIR-South Florida Executive Director Altaf Ali.

Ali noted that earlier this year, Hasner attempted to block a “Florida Muslim Capitol Day.” In an e-mail to more than a dozen Jewish lobbyists, he wrote: “By now, I can’t imagine you haven’t heard about this upcoming lobbying day for Muslims in Tallahassee.Do you all intend to be part of an information campaign in opposition to it?”

In 2007, Hasner sponsored a screening of the anti-Muslim film “Obsession: Radical Islam’s War Against the West” for state legislators.