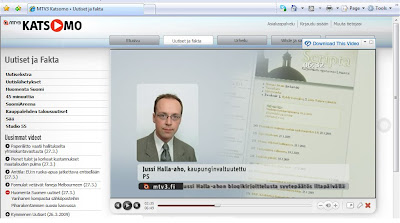 MTV3 News reports the verdict in whether Jussi Halla-aho will stand trial is due this afternoon, he is a Helsinki city councilman who has criticized the reasoning behind mass immigration policies, and is accused of incitement against a racial group. On his blog Scripta, he pondered whether it would be more just if the crime spree of rapes committed by immigrants in the Helsinki area, would in the future, fall upon the very same women within the Greens party who support the arrival of these very same immigrants.

I believe that the only fault in Jussi Halla-aho’s postings, is perhaps a poor choice in wording, nothing more nothing less. The man was clearly not advocating for the rape of women, nor is he against immigration per say, which is the Finnish media’s and Halla-aho’s political opponents choice of battering ram no matter how faulty the logic or the facts.

This is one of the reasons why the Tundra Tabloids takes a very dim view of hate speech laws, because they are a double edged sword. The line crossed is when anyone incites others to commit acts of violence against anyone or any particular group. As the TT has stated before, the main concern where incitement is concerned, is when it becomes part of the mainstream media. If one were to judge the Finnish media in how it reports on Israel, using the very same standards which the Finnish courts are prosecuting individual bloggers, the media would be hand bound and tossed into the clink.

The Tundra Tabloids takes the position that “hate speech laws” only serve the main enemies of our free speech rights, that being first and foremost, the OIC, which is not only leading the charge to deligitimize Israel on the world stage, a major hate crime in itself, but is also spearheading a drive to criminalize any criticism of Islam, under the guise of being against the defamation of all religions, that is the other main agenda at Durban II. But beware, only Islam however, is mentioned by name in their approved proposal. It’s all a ruse.

They, the Organization of the Islamic Conference, led by Ekmeleddin Ihsanoglu, is also seeking to define Islam as a certain ethnic or even racial group and therefore guaranteed minority rights protection, in which any criticism of Islam, will be taken as an insult or defamation against Muslims as a people, to be criminalized by all member nations in the UN. Even the mere mentioning of the Qur’an in connection with Islamic inspired terrorism would be made a criminal offense. Durban II will also try to rework the definition of anti-Semitism, to include Muslims, while the OIC head, doesn’t believe any Muslim “good or bad” can be anti-Semitic.

If this organization succeeds, any of us who dare point out the obvious, will be facing a litigation Jihad nightmare. I kid you not, this has very serious ramifications in what we do. If bloggers or activists point to Imams and Islamic scholars using the Qur’an to incite followers to wage war against the Jew, they could very well be in violation of the new interpretation of the law, and face the Finnish justice system, due to international agreements signed at the UN.

This is the reason why we should be very careful about rushing to get the authorities to prosecute people for racist and bigoted material, especially if they are very marginalized already, because under Finnish law, incitement to hatred is a criminal offense. Again, IMHO, the red line crossed is incitement to violence, and if any material crosses that line, they should be prosecuted to the full extent of the law. The Jussi Halla-aho case doesn’t even come close to doing so. KGS

FROM THE COMMENTS: AFAIK, the case Halla-aho doesn’t have anything to do with his writings about the Green party’s women. Police dropped that line of investigation. This based on Halla-aho’s own media corner. Based on police interrogations, which Halla-aho published, the offence seems to be the very fact of using high immigrant crime as an argument against mass immigration.

If Finland was fair and consistent, which is not, many Finnish newspapers could be charged based on the exact same law as Halla-aho is, and just for writing about Israel’s actions in Gaza. That is, just telling that Israel has killed civilians in Gaza, and perhaps calling for boycott, could qualify as inciting hatred against Israeli immigrants. Heck, maybe you should collect some writings from YLE and HS and go to police…