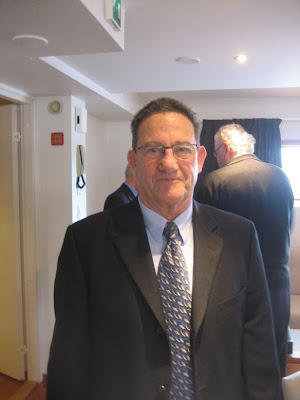 It was a very great honor to be invited by the Israeli embassy to meet and listen to one of Israel’s most distinguished journalists during his visit to the nation’s capital. Ron Ben-Yishai gave an hour long presentation of his views on the current situation between the Israelis and the Palestinians, in what he described as being the “Four Challenges Facing Israel”. According to Ron Ben-Yishai, top of the list of challenges facing Israel was the spectre of Iran obtaining a nuclear weapons capability.

-It’s the most and foremost challenge -not because Israel actually believes that Iran will use a nuclear weapon against Israel- but that much of the Middle East will embark upon the same path, towards building a nuclear weapon of their own.

-Under the umbrella of Iran’s nuclear weapons, guerrilla warfare will become much more active than before, as Israel experiences increased activity from the Hezbollah in Lebanon, with more rocket launchings and cross border incursions.

-Israeli counter measures for example, against the Hezbollah, would receive strongly worded statements that “Iran would reserve the right to act with all means available if Israel refuses to cease its activities within the next 48 hrs.”

He stated further that “they would never speak openly about what exactly they mean by all available means, preferring rather to leave it up for the Israelis to decide themselves the true meaning or intention of the statement.”

-Israel’s financial institutions are sound, the banks have a long history of being very conservative, and will weather the current implosion in the world’s market place better than most. The area most sensitive to the economic crisis however, is the low tech industry, which not only is susceptible to sudden economic woes, but also to sudden terrorist missile strikes because these industries lie in close proximity Israel’s hostile.

Being on Israel’s periphery, these industries are the first to absorb the attacks, which will lead to social, economic and ethnic tension. Many of these industries are situated in Jewish towns and cities, and employ many of Israel’s Arab population. A down turn in the economics, or from repeated attacks across the borders, will cause ethnic tension.

Ben-Yishai also believes that the incoming Israeli government will not be able to improve on the situation, stating that “they will not make things any better”.

-The Arabs know that they can never hope to win in a symmetric war with Israel, they haven’t a chance. for an example, ever since the 91 Gulf War, Syria, the late Hafez Assad, realized that the same US military ability in shutting down Iraq, can be implemented, and perhaps even bettered by the Israelis, so Syria can never hope to compete with the Jewish state militarily.

He went on further to state that:

-The Arabs are in fact clever, and discovered a new method and means to apply pressure on Israel through the use of low-tech asymmetric warfare. Rockets. It’s not a mistake that they’re Russian in origin, these weapons can carry very heavy payloads and travel long distances with no problem.”

Very crude in design, the telemetry is not even electronic, but mechanical. The Scud B,C and D have a system that mechanically tips the rocket on a descending trajectory. These large but crude rockets were the prototype for the even more crude rocket, the Qassem. Like the Qassem, the Scud only managed to hit perhaps only 20% percent of anything valuable, but when they did, the results were devastating.

He then went on to describe what it’s like to live in an area in which a Qassem rocket could fall.

-It’s one thing to hear about it, but entirely another to live it. Mortar shells are the worst of the worst, it doesn’t even allow a person 15 seconds to reach a shelter, the moment one is observed is when it hits. This is the future for Israel if the Iranian’s are allowed to acquire a nuclear bomb, it will allow for every kind of atrocity imaginable, and on a regular basis.

It would help to destroy Israel from within, the social fabric of the scoiety would be severly strained. Israel is working furiously on a radar and missile system as a protective umbrella against these rockets, but as of yet, they are still a few years away from a solution.

-Annexing the West Bank will make Israel neither Jewish nor democratic, and allow for stark comparisons with the former apartheid regime of S.Africa. Nobody wants that. The two state solution is the only solution, Jordan taking portions of the W/B and the Egyptians Gaza, is a highly unlikely scenario.

But presently there is nothing one can do when Hamas is in charge of Gaza, and Abbas’s position in the W/B is weak.

Equality in Israel has a long way to go, like in other states around the world, Israel is no different. But if an Israeli Arab has his/her day in court, normally they will win. I am also proud of the fact that we have Arab MK’s in parliament (the Knesset), in spite of their anti-Israel rhetoric.

He also spoke about the incoming Netanyahu, Likud/Yisrael Beiteinu coalition, that includes the Shas party etc., and how it will create a very untenable situation in Israel and further isolate Israel from the rest the West. The Tundra Tabloids wasn’t very convinced though, there are reasons enough to look at the situation in a different light. There is absolutely NO PARTNER for peace within the Palestinian camp, whether Fatah goes it alone, or manages to make a unity government with Hamas.

Having a Right-wing coalition government within the Knesset, especially during a time when the new US administration is giving all the signs that it believes solving the Israeli-Palestinian conflict is indeed the linchpin in creating a more favorable environment for the US to help solve other problems in the region, will help protect Israel from being too badly pushed into a corner. The need for Israel to resist increasing US pressure into making decisions detrimental to the livelihood of the Jewish state, couldn’t be greater.

The TT also disagrees with Ben-Yishai’s take on Iran. While the prospect of an increase in guerrilla warfare (terrorism) against Israel would in fact exist if Iran obtains a nuclear weapon, I ma not as sure as he, that they wouldn’t be willing to actually use it, especially when they acquire a number of them. The reality of the religious-suicidal messianism of the Iranian regime cannot be underestimated.

The TT also believes that the prospect of both Jordan and Egypt taking control over the W/B and Gaza is not so far fetched as Ben-Yishai would think, it’s all about how the West views the situation and applies pressure. Nothing more, nothing less. We have far more measures available than what the ME is able to counter with, they need us more than we need them.

But in spite of the differences in opinion, it was a real pleasure to meet the man, or as someone else present at the meeting said, “what a pleasure to meet my first cartoon in person”. It’s not every day one meets such an iconic figure, the Tundra Tabloids thanks to the Israeli embassy who made it possible, as well as the man himself, for both his time and his graciousness. Truly a class act. KGS 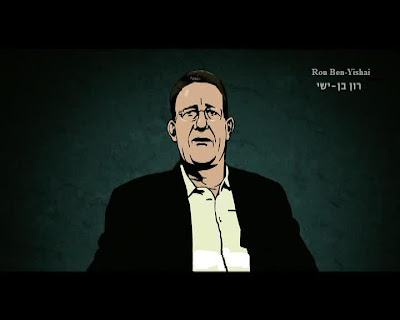 Ron Ben-Yishai, from a scene in ‘Waltz With Bashir’.