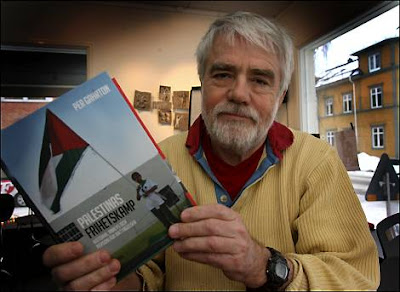 Former Greens leader Per Gahrton: We couldn’t be more pleased!

Police estimate that up to 6,000 demonstrators have joined a march in Malmö to protest against the ongoing Davis Cup match between Sweden and Israel in the city. There are reported to be some 200 masked demonstrators at the back of the march and police confirm that the otherwise peaceful march was disrupted by incidents involving paint bombs, fireworks and Bengal lights.
Several of the masked, black-clad hooligans rushed the barriers holding demonstrators away from the Baltisk Hallen arena where the match is taking place. The first day of competition in the Davis Cup first round match passed off calmly and none of the forecast trouble and fighting occurred. But police took no chances on Saturday with up to 1,000 officers on duty.
Saturday’s march is being marshalled closely by a large police presence including a helicopter escort. Rumours that neo-nazi and other extremist groups intend to infiltrate the march have kept police on alert.
The controversy over the match has been building for weeks and gathered pace when local politicians ordered that the match to be played behind closed doors. Former Green party leader Per Gahrton claimed that the decision had already given demonstrators some success. “We have been helped by brave politicians in Malmö. We thank them for that,” Gahrton said. 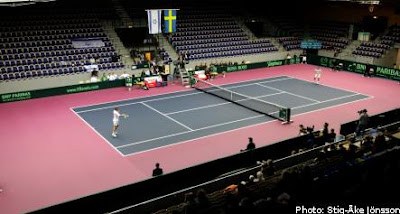 UPDATE: Anti-Fascists (Antifa) thugs run amok at the Baltiska Hallen, what’s amusing are the pleas by the protest organizers of “Please come back!”
Nyheter: While organizers yelled “come back” a group of black-clad hooligans rushed against barriers around the Baltic hall as soon as demonstration train arrived. “Please, please come back. We are here to support the Palestinian people,” cried the organizers. However, none of the hooligans were listening to the appeal. […]
But what would have been a peaceful demonstration was destroyed by the black-clad and masked hooligans who joined from Stortorget. After disrupting the demonstration, the black-clad hooligans lit Bengal fires, shot fireworks, threw paint and ran against the barriers around the tennis hall. Five of them were arrested by the police.
– Ten feet in front of me, I see a whole group of hooligans who broke up cobblestones… […] An older gentleman was full furious when he saw what happened. “People are dying in Palestine and you stand and throw stones…. you scum he cried to them”.
They’re all scum as far as I’m concerned, and shouldn’t be surprised when their Leftist hoodlums, Antifa, Anarchists, the Neo-Nazis take to violence, since they are all ideologically related to each other. The J’lem Post has more on it here as well. KGS