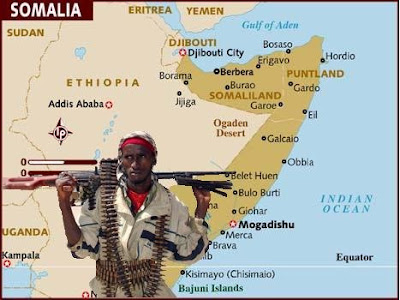 We have already seen the Obama administration’s quiet approval of Pakistan’s “sharia law for peace” in the Swat Valley, in which the Taliban controlled districts of Malakhand and Kohistan in North West Pakistan, will be allowed to implement sharia law, with the hopes of driving a wedge between it and the al-Qaeda-linked Taliban. Oh happy days. 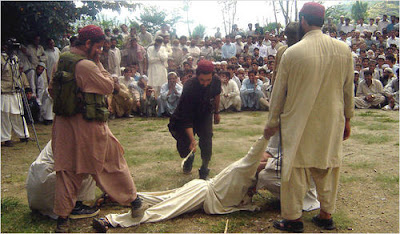 Sharia in ActionOver at the blog, Northern Lights, Toby Archer, a research analyst for the Finnish Institute for Foreign Affairs, has a post up concerning Somalia: The Most Dangerous Place in the World“:

Archer opines: “There is an excellent article explaining Somalia’s recent history and current desperate situation by Jeffrey Gettleman of the NYT in this week’s Foreign Policy magazine. Print a copy off and read it during your coffee break. It’s a fine example of clarity and approachability in dealing with a complex story that will give you a solid introduction to this sad country.

The recent history of Somalia detailed in the NYT article is very eye opening, and deserves to be read by anyone who is interested in the subject. The ignorance of the West concerning Somalia and the region as a whole, can’t be denied. I believe that Gettleman eloquently makes his point, but what I also get from his article, is another form of Western ignorance, or worse yet, a cognitive dissonance where Islam is concerned. According to Gettleman, for the sake of stability, the West should be willing to sign off on the country’s implementation of Sharia law as a method of unifying the country as a whole, and human rights be damned. While he doesn’t say it out loud, but in practice, he, and those who sign on to such thinking are giving a wink and a nod, and their tacit approval for the implementation of the worst system of governance available. Islamic law simply can’t be sanctioned by any Western government that wants to be known as a beacon for human rights and democratic rule.Gettleman: “Western powers should do whatever they can to bring moderate Islamists into the transitional government while the transitional government still exists. Whether people like it or not, many Somalis see Islamic law as the answer. Maybe they’re not fond of the harsh form imposed by the Shabab, who have, on at least one occasion, stoned to death a teenage girl who had been raped (an Islamic court found her guilty of adultery). Still, there is an appetite for a certain degree of Islamic governance. That desire should not be confused with support for terrorism.”I have difficulty in swallowing Gettleman’s claim of “moderate Islamists”, there is absolutely no mention, whatsoever, where that mythical group exists, or have existed in any period of time in the history of Islam. What exactly is a moderate Islamist? Even the term “Islamist” reeks of Western thinking, the TT found that out in Helsinki last year, when the Organization of the Islamic Council’s Sec-Gen, Ekmeleddin Ihsanoglu, stated that “there’s no such thing as Islamism, there’s just Islam“. Ihsanoglu also claimed that evening, that “no Muslim good or bad could be anti-Semitic”, that shows you just how deep anti-intellectual thinking runs in the Islamic world.Other thoughts worth pondering

Wouldn’t a “successful” Islamic state in Somalia, effect not only its immediate neighboring state, Ethiopia, that is struggling with its own Muslim problem (Islamization), but also the Islamization policies currently under way elsewhere at the behest of the OIC? In other words, while peace and stability in Somalia is the desired outcome, won’t the success of Wahhabis (traditional Islam) in Somalia increase problems elsewhere, as it also emboldens the OIC, Arab League etc., with their success?Yes, Somalia as is, presents a clear and present danger, not only to the Ethiopian government but to the world as well. Piracy comes quickly to mind, as well as the West’s grabbing at every available straw that presents itself, in order to bring closure to the Somali problem. So now it appears that the West is looking ever more favorably to the Islamic system of governance, sharia, as being the preferable stop gap method in problem solving in the Islamic world. The West will find it increasingly difficult to reject the anti-human rights, sharia system, from becoming the rule of law elsewhere, once the international community has given its sanction and blessing in Somalia, as well as even in parts of Pakistan, Afghanistan,and all for the sake of stability. They who offer such advice should attempt to live under it first.Signs of Saudi and OIC influence can already be seen here in Europe, especially when one looks at how easily sharia courts have sprung up in the UK. The West is opening a Pandora box by signing on to such a scheme, no matter how well intentioned. The Tundra Tabloids believes that there will be serious consequences once sharia loving supporters here in Europe become emboldened by their co-religionists’ successes elsewhere in the world, and start demanding an even greater role for Islam in Europe. Then what will the European political elite do? Britain has already shown its weak knees to the Islamic world, by refusing Geert Wilders admittance into the UK to show his film, Fitna. Other examples abound, with head scarfs being approved for female police officers in Norway and Britain, and schools dishing out Halal meals to non-Muslim children. Just you wait, the day will come when small areas of exclusively Mulsim populated cities and towns in Europe will demand their own set of rules and laws supersede existing laws. After reaching critical mass, they will seek to govern themselves under sharia, and all they have to do is point to Western states sanctioning of sharia elsewhere in the world as proof of their approval. KGS