Skip to content
Home
/
2009
/
February
/
14
/
Uncategorized
Facebook
Twitter
Google+
LinkedIn
Pinterest
Tundra Tabloids reader Anna, sends in the following information about an op-ed that her father sent to a Finnish newspaper in southern Finland (Häme), concerning the Aamuposti’s (Morning post) report on a small demonstration for the child victims of the Gaza war, but failed to report on the much bigger march in Helsinki this past January, in which over 2000 people rallied in support of Israel. 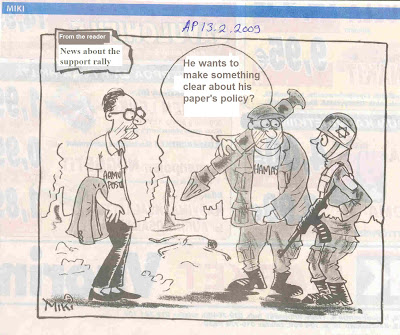 Anna: “On Thursday the Aamuposti published the letter together with their response and yesterday there was a cartoon about it.”
The Finnish newspaper tries to spin the line that it “overlooked the pro-Israel march“, which would be the equivalent of 100 000 people marching through the streets of downtown Washington D.C., and then tries to present itself as always trying to be fair and balanced. But the paper then lets the mask slip by openly admitting that it’s against Israel defending itself if it has to use any kind of force whatsoever. I quote:
Joonas Romppanen: “Any kind of violence from one side or the other is condemnable, and the situation should have an immediate and peaceful solution.”
The paper makes a moral equivalency between Israel’s right to self defense and Hamas’ cynical use of weapons that have no legitimate military use, other than to kill and to terrorize civilians, which is a war crime. The Aamuposti’s editor-in-chief, Joonas Romppanen, uses an anti-intellectual argument that any or all actions of self defense is as bad as the violence perpetrated by the aggressor.
In this kind of “Alice in Wonderland” thinking, the violence perpetrated by a thug robbing a bank is the moral equivalent of the force being used by the police in defending itself and bringing the thug to justice. Such simple minded logic can’t carry the weight of the argument for long, it begins to collapse once the actual law is read, with the ultimate responsibility for any injury or death occurring being firmly placed upon the criminal where it belongs, not on the police.
Too bad the “gatekeeper” of the Finnish newspaper, Aamuposti, is so ideologically bound in his moral relativism, that he can’t distinguish between justified force by Israel, and the mindless violence being perpetrated by the Islamic, genocidal maniacs of Hamas, that could care less about the lives of its own people, let alone the lives of Israeli civilians. KGS
Click on the pic (in Finnish) for an enlargement. 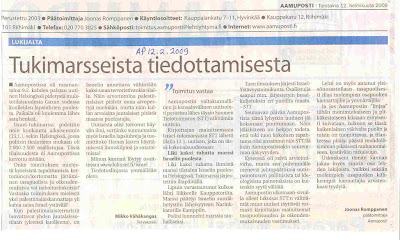 NOTE: Al Avai adds: I find it fascinating that the news media of the West have become, as a result of the Gaza operation and the conflict generally, pacifist. They condemn all violence, and whoever is the cause. All is morally equivalent. The firefighter in Australia who creates a firebreak is as guilty as the arsonist, because both use fire. If I were to say to the Finnish press, “Yes, and by that standard the Finns who shot back at the Soviet army were as guilty as Stalin,” I would find out that their pacifism only goes so far.KGS: How right you are Al, according to the pacifist media, the police are as guilty as the thugs they are trying to apprehend. But once the danger focuses on the pacifists themselves, then all bets are off and its back to the survival of the clever and the fittest.