Skip to content
Home
/
2009
/
February
/
4
/
Anti-Israel Protests
/
Swedish Dhimmi police: “No Plans to Intervene Against Anti-Israel Mob…….
Facebook
Twitter
Google+
LinkedIn
Pinterest
Swedish blogger Ted Ekeroth has an update on the counter-protest that assembled to harrass the pro-Israel rally in Malmö Sweden a week ago Sunday. 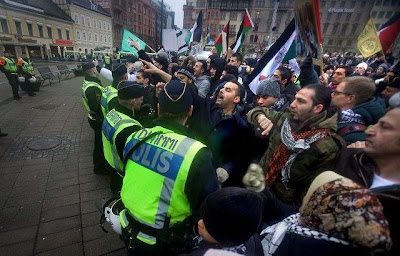 Yes, the police coats have been Photoshopped

Swedish police: “There were no plans to intervene no matter how threatening the counter-demonstration was”

Ted Ekeroth: According to the newspaper “Skånska Dagbladet” (here ) a police officer informs he paper that the police who were at the rally for Israel was ordered, in advance, not to act or do anything against the pro-arab counter-demonstrators no matter how aggressiv or threatening they became. Quote:

– There were no plans to intervene againast the counter demonstrators. The only area to be evacuated if there was a situation was the area there the pro-israeli rally had been given in front of the Town Hall

According to Skånska Dagbladet, the officer who gives them this information is “well informed” on how the police task force works. He wishes to be anonymous. He continues:

As I have written on my blog, the police themselves have a document that outlines how they should act in situations like the one in Malmö och 25th of January. I quote :

If counter demonstrators, by screaming or yelling or in any other way, acts in a way that disturbs, they can be found guilty of “interfering with a public gathering” The “justitieombudsmannen” (Justice ombudsman) stated in 2008 that the right to arrange a counter demonstration does not include a right to hinder or stop the main demonstration Skånska Dagbladet interviews a professor in law. He says that:

When a counter demonstration no longer is peaceful and is about disturbing the main demonstration, in this case the pro-israeli rally that had a police permit, then the constitutional protection for the counter demonstrators has ceased to be valid.
With all this, the police chief Ulf Sempert, continues to lie and mislead.

Today, in Sweden, the mob is ruling the streets and the police is watching passively on the side…

So the Malmö ‘dhimmi’ police handed over control to the streets of their city to the pro-Palestinian baying mob, who will most certainly the next time around, demand the same kind of preferential treatment from their preceived inferiors. A truly disgusting display of weak knees and appeasement by the Malmö city police. KGS