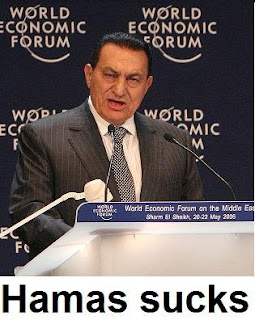 It’s no secret that Egypt’s president for life, Hosni Mubarak, has little affection for the Palestinian Muslim Brotherhood (Hamas), he would like to see their movement quashed as much as the Israelis. It’s refreshing however, to hear an Arab leader speak out loud about the burden of responsibility Hamas bears for the destruction of Gaza.
Mubarak: Hamas to blame for spilled Arab blood
Haaretz: Egyptian President Hosni Mubarak voiced harsh criticism against Hamas on Wednesday, accusing the Islamist Palestinian movement of being responsible for the shedding of Arab blood. “How long will Arab blood continue to be spilled, only to hear those who admit to miscalculating the scope and scale of Israel’s response?”
Mubarak asked in a speech marking Egypt’s national day to honor its police force. Mubarak’s comment came in reference to remarks reportedly made by Hamas political leader Khaled Meshal, who admitted at the end of the three-week Israeli offensive in the Gaza Strip that he did not anticipate the scope of Israel’s operation. Similar sentiments were expressed by Hezbollah leader Hassan Nasrallah at the end of the Second Lebanon War between Israel and Hezbollah in 2006.

Mubarak went on to say that resistance movements must take responsibility over the welfare of their people. “The resistance must take into account victories and losses. It is responsible for the people, who in turn should settle the score [with the resistance] over the gains it has achieved, but also the sacrifices, the pain and the destruction it has caused,” he said.

The Egyptian president also hinted that Hamas and other militant Palestinian factions are serving the Iranian agenda in the region, especially since the fighting in Gaza ended. “They are trying to take advantage of Israeli aggression to force a new reality on the current Palestinian and Arab situation. A new reality that will alter the equation and reorganize the balance in favor of known regional powers and will serve their agenda,” Mubarak said. His comment came in response to Meshal’s recent calls for the establishment of an alternative Palestinian body, to rival Fatah in representing the Palestinian people.
Mubarak of course in an Egyptian Arab, and even though his state is at “peace” with Israel, he can’t refrain from repeating anti-Israel nonsense because at heart, he has a lot in common with the Islamic fundamentalists he loathes. Palestinians don’t have resistance groups, they have terrorist groups with Islamic fundamentalist reasons for continuing on with the conflict.
If they wanted a Palestinian state more than trying to destroy the Jewish one, they would have had a state of their own for over a decade and a half. It’s that simple. Any Israeli response to Palestinian violence, cannot be considered “aggression”, but a justified response to war crimes being perpetrated by Islamic terrorists. But with all his faults and warts, Mubarak is standing head and shoulders above many Western leaders in calling a spade a spade. KGS

H/T: MFA source SHOCKER! UN chastises Hamas for stealing from it’s citizens. But hey It’s something that the Tundra Tabloids has been reporting on for weeks! Finally the UN manages to speak on something that has substance and not the consistency of helium.UN: Hamas seized food and blankets from needy Gazans “A United Nation spokesman on Wednesday accused Hamas police in Gaza Strip of seizing thousands of blankets and food parcels meant for needy residents. Christopher Gunness, spokesman for the UN’s Relief and Works Agency, said Hamas police raided a UN warehouse in Gaza City late Tuesday, snatching 3,500 blankets and over 400 food parcels. “Members of the Hamas police seized by force 3,500 blankets and 406 food packages ready to be delivered to hundreds of poor Gaza families,” the statement said.”Remember folks, this is a group that the international media and UN officials can be trusted to repeatedly give cribibility to their worthless claims. How refreshing to see a UN official telling it like it is. It won’t last long though, someone will get to him and set him straight. KGS